Crypto holders had a rough ride in 2022.

At the start of the year, the collective market cap of cryptocurrencies worldwide stood at $2.2 trillion. As the year ends, that figures stands at just below $800 billion.

The industry’s euphoric highs of last year descended into a bear market of epic proportions, leaving many of the industry’s major players in collapse. Or worse.

The plunge in crypto prices started with central banks cutting the cord on easy money policies, which dragged down risky assets first, and the problems multiplied from there — accounts were frozen, bankruptcies declared, frauds uncovered.

This year that battle for outlandish returns whittled down to a competition for least bad losses. And the results are more of a grab bag of cryptocurrencies rather than reflecting a clear theme on the industry’s progress. 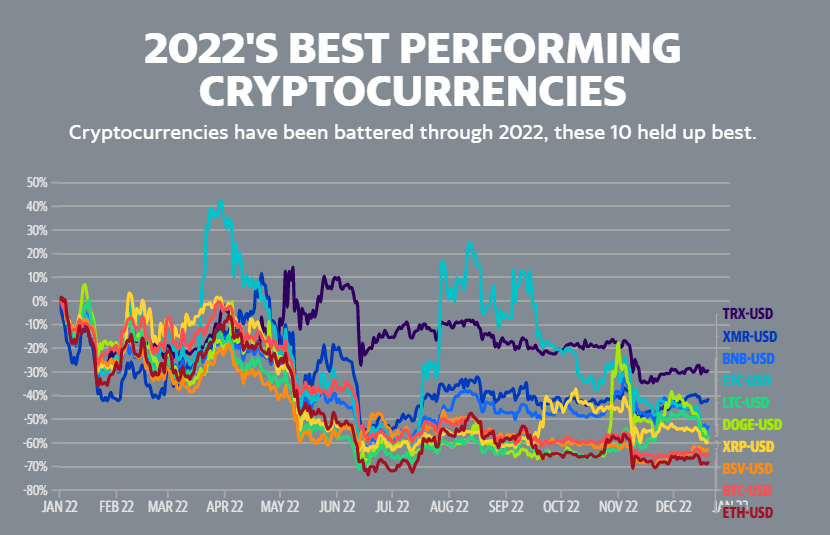 After outperforming bitcoin by 355% last year, ether (ETH-USD) came in as the 10th-best performing cryptocurrency in 2022, falling just less than 70% this year.

Despite its performance, the second-largest cryptocurrency pulled off the Merge upgrade in mid-September, transitioning to proof-of-stake from proof-of-work, which proved to be one of the industry’s few success stories in 2022.

The technological feat has also freed Ethereum core developers to dive into other initiatives meant to improve the protocol’s transaction scaling, privacy, and use as a financial layer.

The Merge made the Ethereum blockchain 99.95% more energy efficient and was a deflationary force on ether supply. 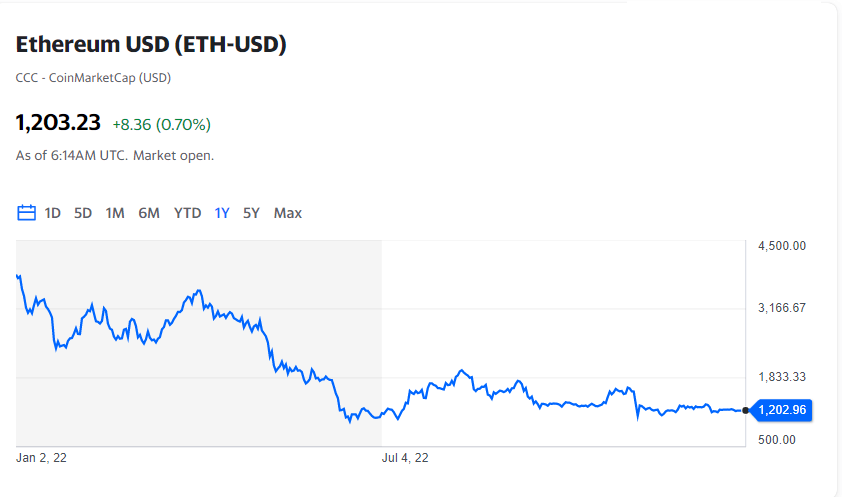 The world’s biggest cryptocurrency fared better than some smaller counterparts, but was not immune from 2022’s market washout.

In April, when bitcoin traded at $41,000, Alex Thorn, head of research with Galaxy Digital, said he doesn’t think the market has changed its view on bitcoin (BTC-USD), which it sees as both “an option on a future where the cryptocurrency is treated like digital gold” and a “protest of the lack of credibility of central banking.”

Between its November 2021 peak and December 12, bitcoin investors have given back $213 billion in realized losses according to data collected by crypto analytics platform, Glassnode.

“In terms of an outlook for next year, it’s really hard to be bullish on bitcoin and crypto in general given the tenuousness of macro and monetary conditions,” Thorn added. 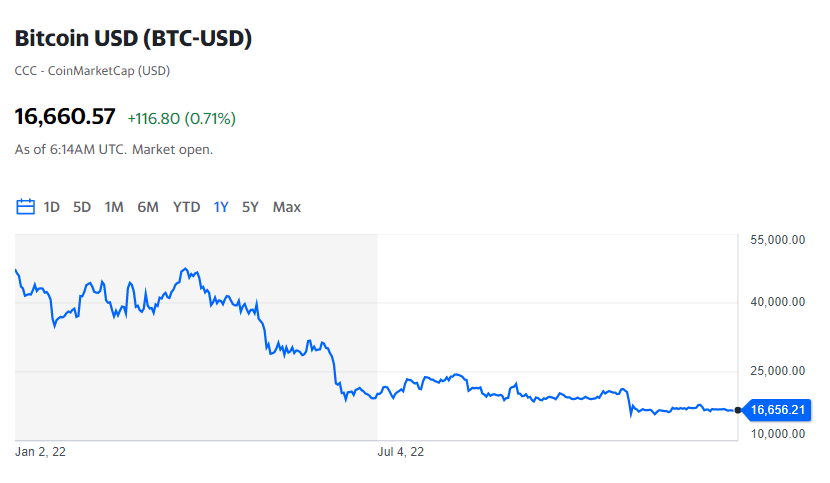 Widely held by retail investors, the original “meme” coin followed most of the crypto market in a massive sell-off starting in the second quarter.

Still, Dogecoin fared better than many tokens in 2022.

However, unlike most major cryptocurrencies, Dogecoin (DOGE-USD) had already sold off from 64% from its May 2021 peak — reached when Elon Musk appeared on Saturday Night Live — to the end of 2021.

“People know that it’s a joke. They like the joke,” Thorn told.

Thorn’s team published a paper on DOGE at its 2021 peak, noting “a general lack of development effort,” and “no serious long-term narrative or use case.”

Still, Thorn’s team found Dogecoin “had a fair launch,” meaning it didn’t include a presale or venture capital fundraise, which can be red flags when insiders carry large stakes that put outside buyers at a disadvantage.

The cryptocurrency has outperformed most others through the fourth quarter, due in large part to Elon Musk’s deal to buy Twitter, with users speculating this purchase could have some benefits for Doge holders.

Coming in with a 53% loss, Ethereum Classic (ETC-USD) also benefited from speculation leading up to the Merge.

While its use and developer community is a fraction of the size of Ethereum’s, Thomas Dunleavy, a senior market researcher for Messari, pointed out the small-cap token has routinely seen value appreciation ahead of Ethereum-related software upgrades.

As Ethereum’s Merge was reaching completion, skeptical investors viewed Ethereum Classic and other offshoots of the second largest cryptocurrency as a hedge or insurance policy in case the upgrade failed.

Exchange-associated tokens such as OKB (OKB-USD) and BNB (BNB-USD) both performed better than most cryptocurrencies this year.

However, as recent developments through the FTX crisis and the corresponding collapse in its exchange token FTT have shown, the value of these tokens can change quickly based on the management of their corresponding crypto exchange.

Exchange tokens can give holders specific benefits like lower trading fees and the ability to vote on exchange decisions. Exchange tokens are also almost always linked to a crypto exchange’s success as a business, serving in part like corporate equity. 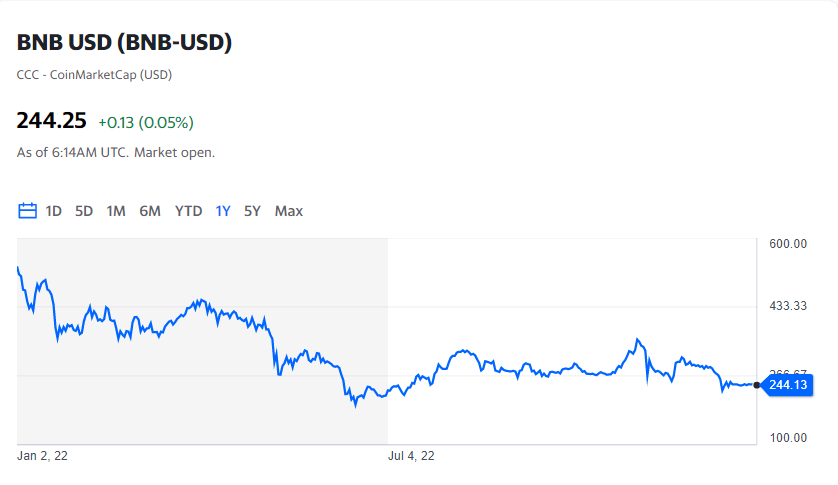 As in past years, the tension between transparency and privacy for cryptocurrency transactions returned as an undercurrent through 2022.

Unlike Bitcoin and Ethereum, Monero (XMR-USD) gives users less censorable transaction privacy by default without requiring the use of crypto mixing services.

Monero’s more modest sell-off this year suggests its feature as a privacy coin offered users more utility than the majority of cryptocurrencies in the market.

TRX (TRX-USD), the native cryptocurrency of the Tron blockchain, came out ahead of most other cryptocurrencies, losing less than a third of its value this year.

The token’s value, according to Messari’s Thomas Dunleavy, has mainly benefited from the Tron ecosystem’s growing amount of stablecoin volume. TRX’s supply burn is based on its level of transaction volume.