Two of the largest crypto exchanges have just announced one of the stranger tech mergers in recent memory (and that’s saying something). Binance plans to acquire its rival FTX after a brief but very public dispute. Binance CEO Changpeng Zhao sold about $529 million in FTX’s native token on November 6th in response to “recent revelations that came to light,” particularly a CoinDesk report that FTX was facing a liquidity crisis. That led to FTX chief Sam Bankman-Fried accusing Binance of attacking his company with “false rumors,” and maintaining that everything was “fine.” By today, however, the two companies had reached a takeover deal while acknowledging that Binance would help resolve a “liquidity crunch” affecting FTX’s transactions.

Data suggests FTX may have been in a particularly bad state. In a discussion with TechCrunch, CryptoQuant noted that FTX’s net crypto asset holdings plunged 83 percent in just the past two days. That reportedly made withdrawals so difficult that FTX had to introduce stablecoin (crypto pegged to an external value) liquidity to process the moves through the markets or other exchanges. The company’s stablecoin reserve has fallen by 93 percent in the past two weeks, and related withdrawals fell to near-zero by early this morning. The trouble prompted an investor “exodus”. 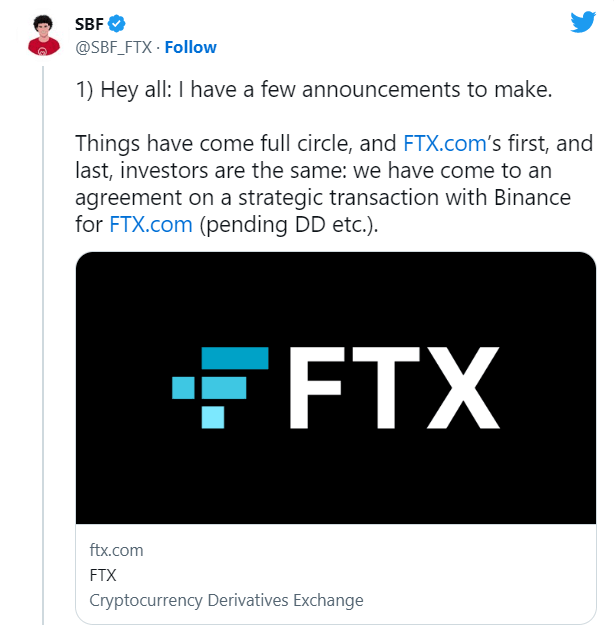 The deal is non-binding, and the companies will only start conducting due diligence (that is, an appraisal) in the “coming days”. If completed, however, the acquisition could shake up the crypto industry by eliminating Binance’s main competitor. This won’t overcome fears of a sustained crypto market downturn, but may give Binance a US presence it doesn’t currently have.

That “if” is important, mind you. FTX’s Bankman-Fried has been testifying in Congress, and Binance has reportedly faced investigations from both the US Securities and Exchange Commission as well as the UK’s Financial Conduct Authority. The countries are concerned Binance isn’t complying with regulations, and (in the US) possibly breaking the law. It’s not guaranteed that regulators in either country will be keen on the proposed union, particularly when Binance’s US affiliate was banned in 2019.