Predicting the price of a stock a year from now is hard, even for Wall Street’s best analysts. But for investors who bought into the bullish expectations behind cryptocurrency-related stocks at the beginning of this year, those forecasts now look like pipe dreams.

For 10 crypto stocks tracked by Bloomberg, with at least three analyst price targets at the start of 2022, the average return needed to reach their 12-month price target from Jan. 1 is nearly 1,350%. To put that in perspective, it took Amazon.com Inc. more than eight years — from 2013 to its record high in late 2021 — to return investors that amount.

Shares of crypto exchange Coinbase Global Inc. would need to rally a staggering 782% from their current level in order to reach their average 12-month analyst price target from the beginning of this year. Still, that pales in comparison to Stronghold Digital Mining, Inc. which entered the year with a target of $41.25 and now trades for less than a dollar per share, requiring a 5,492% jump to reach that mark.

This year’s swift plunge in the price of Bitcoin, which reached 65% following the collapse of Sam Bankman-Fried’s FTX, is the main culprit behind the lopsided projections. The world’s largest digital asset touched a record high of nearly $69,000 in early November 2021, fueling a wave of bullish optimism for almost anything connected to the space.

Still, analysts were slow to react to the rapid decline in Bitcoin. The average analyst price target on Coinbase increased roughly 5% over the two months following Bitcoin’s all-time high. Over that same period, Bitcoin plunged more than 38% and Coinbase’s share price sank roughly 37%. Since then, analysts have decreased their 12-month price target for the crypto exchange by an average of 80%.

BTIG analyst Mark Palmer became the latest to slash his outlook for crypto bank Silvergate Capital, cutting his base case projection to $51 a share on Tuesday from the $135 price he initiated the stock at in August.

“Our new price target reflects our reduced estimates for digital asset customer deposits on the Silvergate Exchange Network in the aftermath of the collapse of FTX and amid the ongoing ‘crypto winter,’” Palmer wrote in a note to clients.

Still, Palmer maintained his buy rating on the stock, calling it “very undervalued,” while adding that the decline in its share price “has been due in part to a widespread lack of understanding of the company, its balance sheet, status as a regulated bank, the SEN and the SEN Leverage program.”

He’s not alone in maintaining his bullish conviction. The current average price target for the stock, which has slumped more than 80% this year, calls for Silvergate to roughly double from its current level over the next year.

It’s a similar story among other crypto stocks. Across the 10 stocks tracked by Bloomberg, the average 12-month return from current levels is about 165%, that compares to nearly 110% from the start of this year. 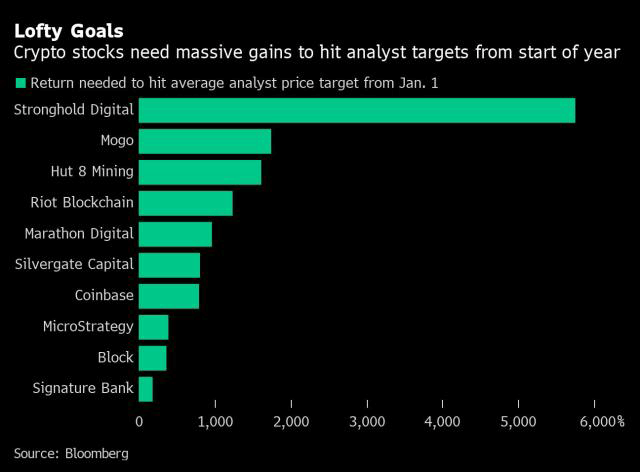