Countdown begins to Fed’s last meeting of 2022: What to know this week

A parcel of economic data awaits Wall Street this week as investors inch closer to the Federal Reserve’s final rate-setting meeting this year.

U.S. central bank officials are scheduled to convene Dec. 13-14 and expected to lift their benchmark interest rate by 50 basis points. Federal Reserve members have entered a blackout period ahead of the gathering, which limits public speaking engagements ahead of policy-setting meetings.

Data releases monitored most closely for Fed clues include the monthly jobs report, which blew expectations for November on Friday, and Consumer Price Index data – next out Dec. 13 – as they are two of the most comprehensive economic releases used by officials to set policy. Until the fresh CPI data comes out, a gauge of producer prices will give traders another look at where inflation is trending. 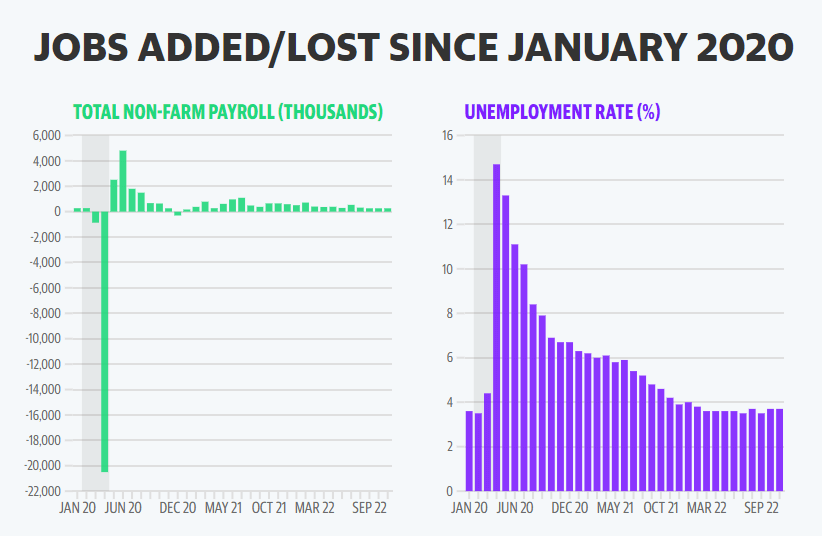 Economists surveyed by Bloomberg expect November’s PPI rose 0.2%, a climb on par with the prior month, while moderating to 7.1% from 8.0% on an annual basis over the period. Core PPI, which strips out the volatile food and energy components, is expected to have increased by the same monthly margin as the headline reading while slipping dropping from 5.8% to 6.7% year over year.

The inflation picture may have started to look different if the U.S. hadn’t narrowly avoided a nationwide strike by railway workers, a stoppage that was expected to have devastated the economy and hit wholesalers particularly hard, after Congress hastily passed legislation to impose conditions from a tentative deal reached in September.

As things stands, the forecast of a 50-basis-point rate increase next week is shared by markets and Wall Street megabanks, and particularly after the view was largely affirmed by Fed Chair Jerome Powell on Wednesday during a speech in Washington D.C.

“Monetary policy affects the economy and inflation with uncertain lags, and the full effects of our rapid tightening so far are yet to be felt,” he said. “Thus, it makes sense to moderate the pace of our rate increases as we approach the level of restraint that will be sufficient to bring inflation down.”

Powell added that the “time for moderating the pace of rate increases may come as soon as the December meeting.” 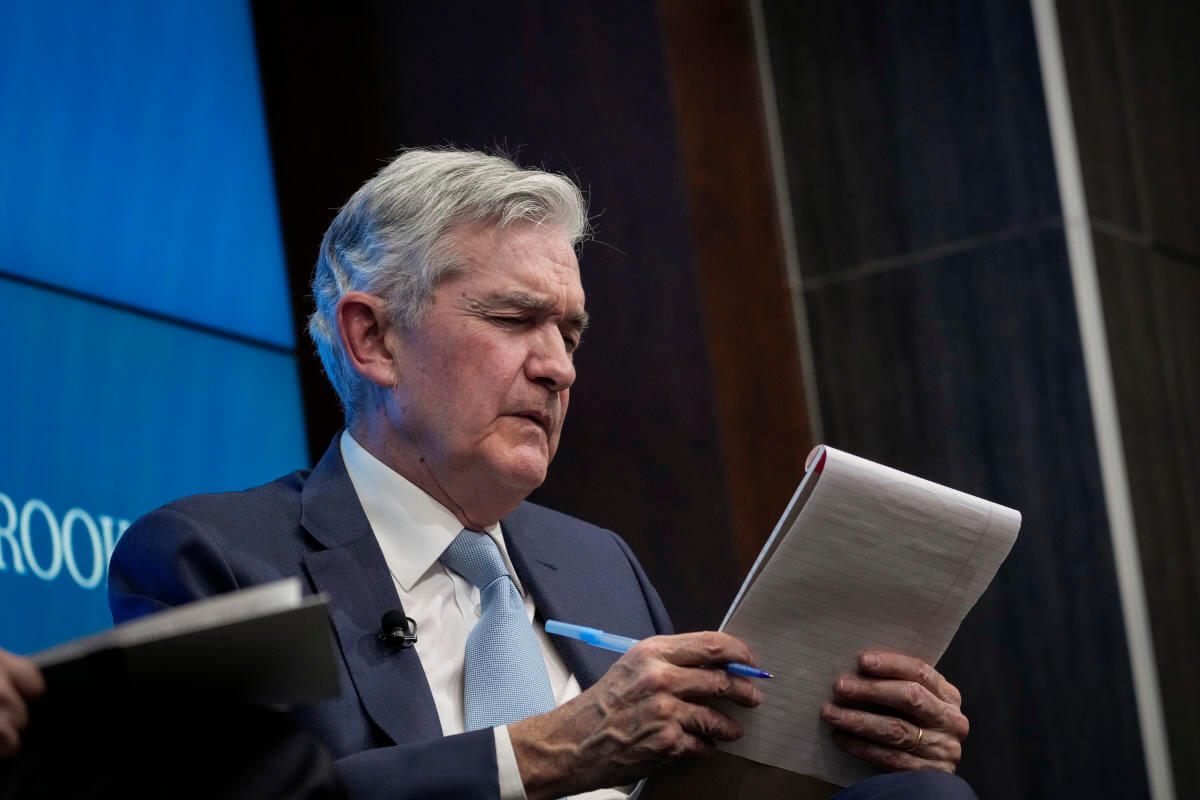 And while expectations for a downshift from the 0.75% hikes delivered over the past four meetings are largely priced in, investors now wonder how much longer the central bank’s tightening campaign will last, how high the federal funds rate will go, and how long it will stay there before any cuts.

Bank of America projects the terminal rate to reach a range of 5.00%-5.25%, a view many of its megabank peers share, though BofA Chief Economist Michael Gapen speculated in a call with reporters last week that the rate may go as high as 6% due to the tremendous momentum of the labor market.

“Risks to our outlook for Fed policy are skewed toward higher terminal rates given the persistent imbalance between labor supply and labor demand,” Bofa strategists led by Gapen stated in a note released Friday after November’s hot jobs report. “A slower pace of hikes seems appropriate from a risk management perspective, but strength in labor markets, in our view, likely means the Fed will have to lean in the direction of doing more, not less, to put inflation on a sustainable downward trajectory.”

With a slower pace and eventual pause on rates seemingly underway, Wall Street’s attention has turned to the longer term impacts of a higher rate environment on growth. In weekly commentary, Baird’s Ross Mayfield and Nicholas Bohnsack, president and head of portfolio strategy at Strategas, a Baird company, predicted that even if inflation continues a downtrend, the cost of getting levels from 4% to the Federal Reserve’s long-term price stability target of 2% becomes “increasingly higher.”

“It would likely come with some significant shakeout amongst businesses and the labor market,” they said in a note. “Ultimately, we think they’ll slow the pace at which they’re raising rates and then take a long time to observe the landscape and the impact that may have.”

This view was shared by BlackRock Chief Executive Officer Larry Fink, who said at a conference last week that he’s confident inflation will come down — just not to the 2% level and amid a period of economic stagnation.

At the Dealbook Summit in New York on Wednesday, Fink expressed fears of waking up in a world of “2ish-3%” interest rates with “3-4%” inflation.

Elsewhere in the week ahead, an OPEC+ meeting this weekend will place energy markets into focus. The oil cartel agreed to maintain current production levels to assess the global oil market as uncertainty over China and Russia looms over the commodity. The U.S. joined the European Union, the Group of Seven nations, and Australia on Friday in capping the price of Russian oil at $60 a barrel.

While the third quarter has seen results that were largely better than feared, Wall Street strategists have warned of zero earnings growth ahead. 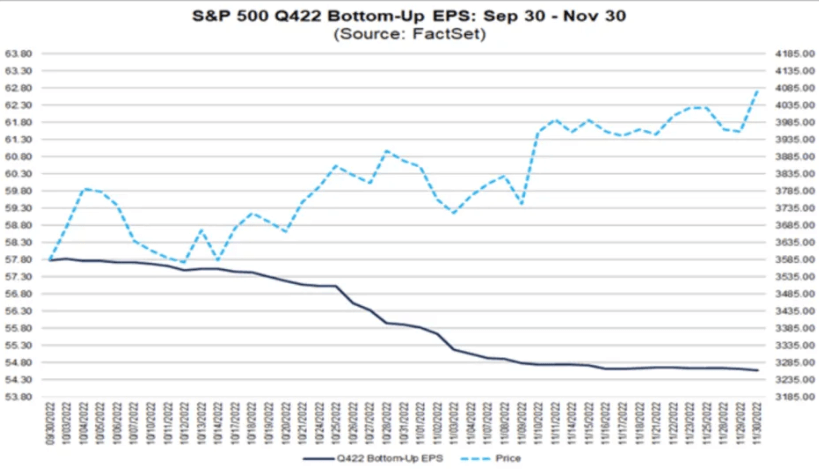 In October and November, analysts lowered earnings estimates on S&P 500 companies for the fourth quarter by a larger-than-average margin, according to data from FactSet Research. The bottom-up earnings per share estimate for Q4 decreased by 5.6% to $54.58 from $57.79 between September 30 to November 30.

“There’s something to be said for the idea that inflation creates this money illusion, where the level of sales and profits remain elevated simply because prices are higher, especially relative to what might be considered a normal-sized drop in earnings associated with recession,” Mayfield and Bohnsack also said. “When you incorporate that, it looks like the economy’s not being damaged as much.”

Consequently, they added, “what we’re very focused on is corporate profit margins and the level of profitability, and there we have started to see some real acute pain across the landscape. We’d anticipate that earnings estimates keep moving lower as corporate guidance softens and costs continue to increase.”