On the 70th anniversary of the original Corvette reveal in New York City, an all-new, first-of-its-kind Corvette is here.

The 2024 Corvette E-Ray is the first ever electrified, hybrid Corvette featuring all-wheel drive. Chevrolet (GM) says the E-Ray is the only sports car pairing a naturally-aspirated (meaning non-turbocharged) V-8 engine with an electric motor. While the 6.2 liter V8 powers the rear wheels, the front axle is connected to an electric motor that can give the Corvette “eAWD” as Chevrolet calls it.

“Corvettes must provide an exhilarating driving experience on backroads and tracks, and E-Ray nails it,” said Tadge Juechter, Corvette executive chief engineer in a statement. “The electrification technology enhances the feeling of control in all conditions, adding an unexpected degree of composure.”

All told, the the electrified powertrain will send the E-Ray from 0-60 mph in a brisk 2.5 seconds, with the quarter-mile coming in at 10.5 seconds. Both of these figures are 0.1 seconds quicker than the top-of-the-line Corvette Z06.

In addition, the E-Ray features a “stealth mode,” as Chevrolet calls it, allowing the car to operate in electric mode on the street up to speeds of 45 mph. Once the battery is depleted, the E-Ray will then switch to gas-powered mode — and harvest energy through driving and braking to recharge the battery. Chevrolet also says the E-Ray’s Active Fuel Management system uses the electric motor to extend 4-cylinder operation in different driving conditions.

Chevrolet did not release any estimated figures on mileage or electric-only range. The E-Ray will go on sale in 2023, starting at $104,295 in base 1LZ trim. 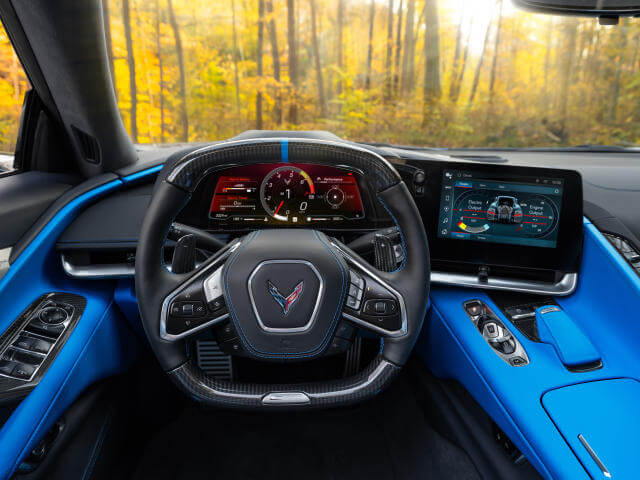