Chevron Corp on Friday reported its second-highest ever quarterly profit, blasting past analysts’ estimates, driven by soaring global demand for its oil and gas and rising production from its U.S. oilfields.

The surge comes as oil companies book mounting profits with prices near record levels and supplies tight on output cuts during the COVID-19 pandemic, as well as market disruption from the war in Ukraine.

Chevron posted a third-quarter net profit of $11.2 billion, or $5.78 per share – almost double the $6.1 billion from the same period last year, and well ahead of Wall Street’s $4.86 estimate.

U.S. oil executives have been loath to crow about this year’s earnings gains – surpassing the once-sizzling tech sector – preferring to emphasize investment commitments. But soaring profits are feeding criticism from consumer groups in the United States and Europe as inflation climbs.

The company’s cash flow from operations soared to a record $15.3 billion, far higher than the previous quarter. Chevron’s return on capital employed – a measure of how much it earns from each dollar invested in the business – jumped to 25%. 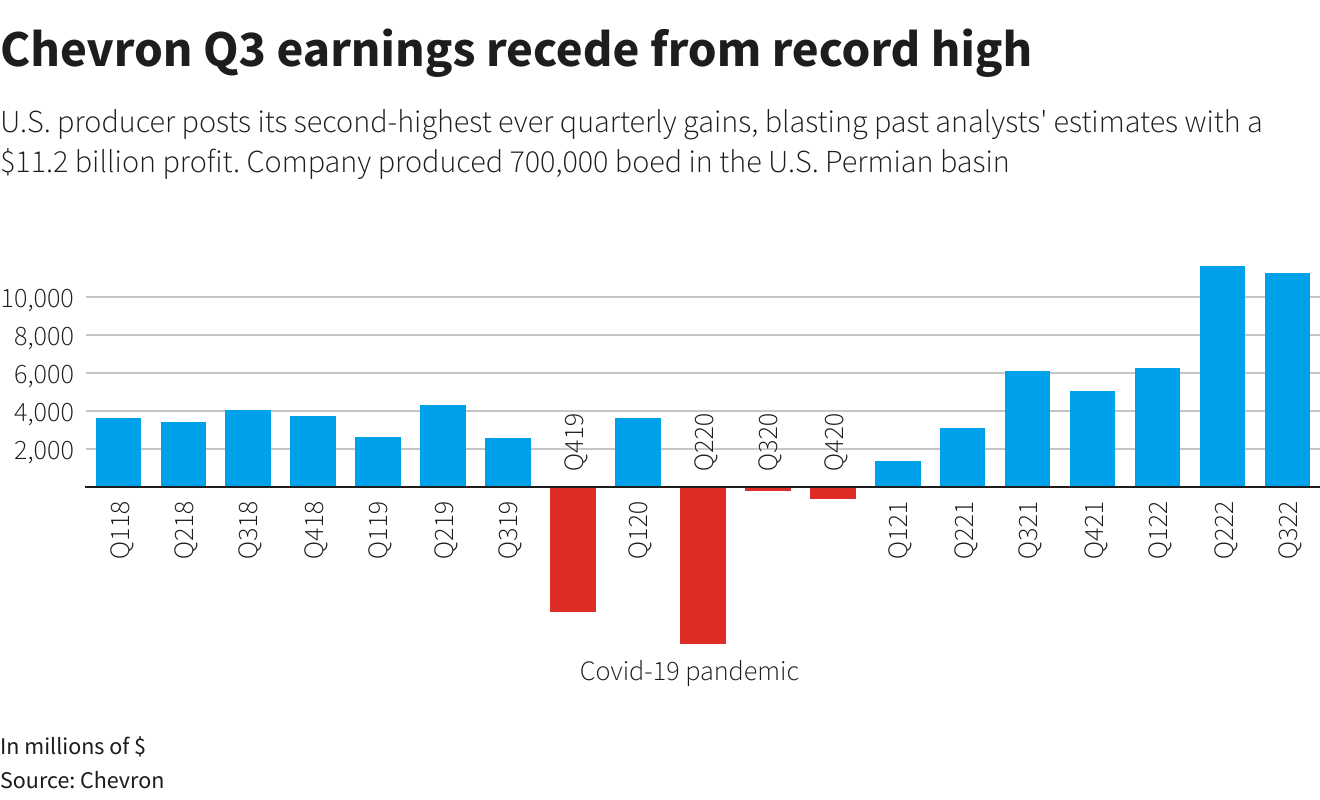 Output from the U.S. Permian basin topped 700,000 barrels of oil equivalent per day (boed), up 12% from a year ago and above the second quarter’s 692,000 boed. But global production in the first nine months of the year is down by about 100,000 boed from the 3.093 million boed from the same period last year.

Overall, oil and gas production was roughly flat last quarter factoring in the sale of some producing properties in Asia.

Its oil and gas business posted an operating profit that surged 81% to $9.3 billion, while its oil refining business nearly doubled to $2.5 billion.

Still, profit from refining cooled from the second quarter, keeping overall earnings below the company’s all-time record of $11.6 billion. Refineries processed about 13% fewer barrels per day from the year-ago period, primarily due to planned maintenance, the company said.

However, refined product sales of 1.25 million barrels per day were up 5% from the year-ago period, mainly due to higher renewable fuel sales following its acquisition of biodiesel supplier Renewable Energy Group.