A Northrop Grumman Antares rocket successfully boosted a space station cargo ship into orbit early Monday and while one of two solar arrays failed to properly deploy, officials said the spacecraft will have enough power to complete its two-day rendezvous.

The condition of the array and what might have caused the problem were not immediately clear. Dina Contella, operations integration manager of the space station, said a final decision on whether to proceed with the Cygnus spacecraft’s capture and berthing today will not be made until after an engineering analysis. 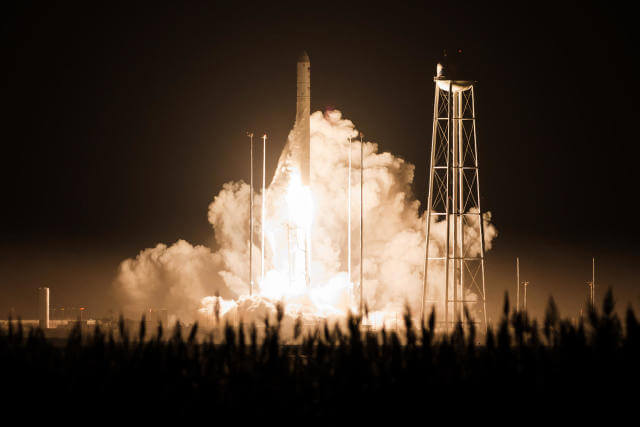 But engineers will get a good look at the array during the cargo ship’s final approach, and Contella said she was optimistic Northrop Grumman eventually will get the circular panel deployed and locked in place.

“Right now, the array is not deployed,” she said. “And so the team is trying to assess the data (and) figure out their next step. … I’m very hopeful, actually, that Northrop is going to find a way to deploy the array fully. I think that we have a really good chance at getting there.”

Running a day late because of a fire alarm that forced Northrop Grumman engineers to evacuate their control center Sunday, the Antares 230+ rocket’s two Russian-built RD-181 engines ignited at 5:32 a.m. EST, pushing the booster away from the Mid-Atlantic Regional Spaceport at NASA’s Wallops Flight Facility.

Arcing away to the southeast, the rocket smoothly accelerated as its Ukraine-built first stage consumed propellant and lost weight, climbing directly into the plane of the space station’s orbit. Nine minutes after liftoff, the Cygnus cargo ship was released to fly on its own.

“It was a spectacular launch,” said Jeff Arend, manager of space station systems engineering and integration. “We’re happy that Cygnus is on its way to the ISS.”

If all goes well, the cargo ship will catch up with the space station early today, pulling up to within about 30 feet and holding position while Nicole Mann, operating the lab’s robot arm, locks onto a grapple fixture.

At that point, flight controllers at the Johnson Space Center in Houston will take over arm operations, pulling the Cygnus in for berthing at the Earth-facing port of the station’s central Unity module. But that assumes clearance to proceed with a possibly stowed or partially deployed solar array.

On board the cargo ship: 3,608 pounds of crew supplies, 1,873 pounds of research gear, 2,375 pounds of space station hardware and 317 pounds of computer components and spacewalk equipment, including hardware needed for upcoming excursions to upgrade the lab’s solar power system.

The manifest also includes some “much-deserved treats for the crew,” Arend said.

“They will have their usual menu, but also some special requests like peanut butter, olives, several cheeses and even pumpkin spice cappuccino,” he said. “And the team has loaded some fresh fruit as well — apples, blueberries, oranges — and some ice cream in the freezers.”

The launching marked the next-to-last Antares 230+ flight as Northrop Grumman and Firefly Aerospace develop a new rocket in the wake of Russia’s invasion of Ukraine, the imposition of U.S. sanctions and the subsequent termination of RD-181 deliveries for use in the Ukraine-built first stage.

The first stages used for Monday’s launch and one more Antares flight, planned for next March, were already on hand when hardware deliveries were cut off following the Russian invasion.

In the transition to a new rocket, Northrop Grumman plans to launch three Cygnus flights using SpaceX Falcon 9 rockets before the all-American Antares 330 debuts in late 2024.