Can VCs game crypto out of this downturn?

Last week, we looked at Musk holding onto doge. This week, we’re talking about where all of this crypto VC money is possibly gonna go.

The reality is that the dreams of web3 investors and founders are facing a bit of a jam — a crypto downturn generally means less hype, fewer conversations between friends and generally less organic consumer onboarding to consumer experiences. This is far from ideal for VCs who saw a consumer web dream within grasp, but fortunately they’ve got some deep pockets thanks to recently raised mega funds with crypto bets as their sole focus.

Still, it’s a rough time for consumer crypto’s core audience though, with recently minted acolytes down bad and many likely discouraged from sinking more time, money or effort into new web3 projects. The question becomes how to put this VC money to work in a bear cycle; plenty will take the period of reduced attention to dump into infrastructure and the “picks and shovels” toolsets. Others might go insular, backing consumer projects that are further disconnected from the broader worlds of crypto but expose users to synthetic economies, wallets and digital goods, an arena served particularly well by crypto-infused games.

Gaming does seem like a great consumer beachhead for crypto and it had expect plenty of these dedicated crypto funds to dump a significant quantity of their funds into studios and platforms pursuing this. There are a lot of substantial challenges, including generally negative user sentiment and getting platform buy-in — given that NFTs are still treated with a high-degree of hostility by app stores and gaming platforms.

The self-contained worlds of gaming titles with dedicated tokens disconnected from the more self-referential corners of crypto may be the easiest place to find new eyeballs. And as customer acquisition costs across the board climb, VCs may be more willing to subsidize customers directly as part of user acquisition, returning to the gig economy days of VCs bribing new users to sign-up.

It’s been a weird bull cycle for crypto gaming. While plenty of money flowed into play-to-earn titles and pixelated SNES-quality DeFi-infused games, it’s fair to say that there wasn’t anything that emerged that was actually good. Most games over-indexed on profit and clearcut ponzinomics that juiced growth to the most extreme ends without a concern for stability. Great games take time to build, and fun games take a level of user concern that’s hard to optimize for when you’re trying to maximize near-term profit on both ends of the deal. 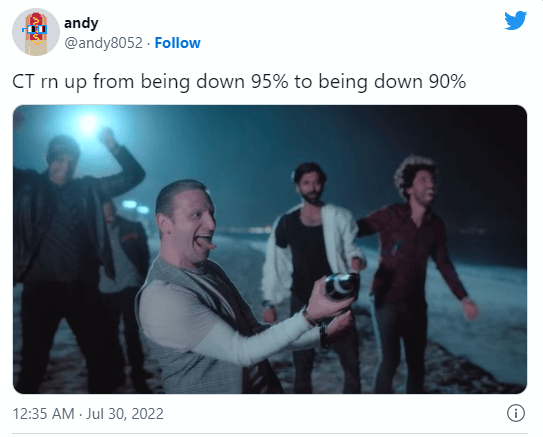 We thought winter was already here for crypto, but U.S. regulators just made it seem a lot colder. First, the U.S. Department of Justice arrested three people, including a former Coinbase employee, for alleged insider trading on the exchange. Then, the Securities and Exchange commission charged them with securities fraud, arguing that several of the coins they had traded were, in fact, securities – a designation that comes with a whole host of rules that Coinbase and other exchanges haven’t necessarily followed. We shared our unofficial thoughts on how the laws might be interpreted and what this could mean for major crypto exchanges.

We also talked about the situation involving bitcoin that might finally be enough to turn Elon Musk stans into skeptics and beloved video game Minecraft cancelling NFTs, at least for the time being. Our guest was David Nage, a portfolio manager at digital asset management firm Arca, who helped us make sense of the ongoing mayhem in the markets.

Where startup money is moving in the crypto world:

2. Unstoppable Domains, a popular blockchain naming system provider and identity platform, raised $65 million in its Series A funding round at a $1 billion valuation led by Pantera Capital.

3. Aptos Labs, a blockchain project from ex-Meta employees, raised $150 million in an FTX-led Series A round.

4. Blockchain ecosystem Topl has raised $15 million in a Series A funding round led by Mercury, Republic Asia and Cryptology Asset Group to help companies track and monetize social impact initiatives.

5. Crypto lender CLST nabbed $5.3 million for its seed round from investors including Coinbase and Kraken.

7. Web3 gaming firm Mighty Bear got $10 million in a Framework Ventures-led funding round for its Mighty Action Heroes game.

8. FTX CEO Sam Bankman-Fried led a seed round for Trustless Media, a startup that is building community-owned web3 shows.

9. Cybersecurity blockchain protocol Naoris raised $11.5 million in an equity and token-based financing round from investors including Draper Associates.

10.South Korean metaverse company Anipen secured investment of ~$12 million in its ongoing series B funding round from Medici Investment and others.

The week in web3

After a former Coinbase employee and his two associates were arrested this week at the behest of the U.S. Department of Justice for alleged front-running on the crypto exchange, they were hit with securities fraud charges by the SEC. Shortly thereafter, Bloomberg revealed that the SEC had already been investigating Coinbase already for potentially allowing securities to trade on its platform without the adequate filings and disclosures.

Interestingly, the SEC’s charges, at least in the securities fraud case, hinged on several pretty niche coins. The token they chose to go after say just as much, in some ways, as the ones they didn’t. Regardless, Coinbase is pretty upset and says it vetted all the tokens on its platform before listing them to make sure they aren’t securities.

If Coinbase gets nailed in this suit, it’ll have ripple effects throughout the industry. Already, other major crypto companies are facing similar charges, including Binance, Ripple Labs and Yuga Labs, either in the form of disgruntled investors filing lawsuits against them hoping to get them in trouble for illegally selling securities or in the form of investigation by U.S. regulators, as is the case with Coinbase.

Until we know more about how regulators and legal experts are likely to treat each individual token, it’s worth examining what the current securities laws even are and how they might apply to Coinbase.

“Tons of capital has been raised across the crypto industry in recent months, but there has been a noticeable pause in deployment. That might change in the coming months. As it’s taken longer to close crypto VC deals, valuations across the industry have dropped, according to David Nage, venture capital portfolio manager at Arca.”

“As many subsectors in the crypto market continue to take heavy hits from recent volatility, some market players see decentralized finance (DeFi) as resilient and gaining interest despite the negative macroeconomic environment. Centralized financial institutions are similar to traditional firms, with people running their operations and managing their funds. In contrast, DeFi protocols use technology — not people — to execute services through things like smart contracts.”