In the 1990s, Blockbuster, more formerly known as Blockbuster LLC, was a global brand-name. The brand had more than 9,000 stores worldwide and peaked in 2004 before online video streaming services hit the home entertainment market.

The Great Recession of 2008 and video-on-demand streaming services brought the Blockbuster journey to an end. In 2010, the Blockbuster filed for bankruptcy protection and was subsequently purchased by Dish Network. Just 1,700 stores remained at the time of the acquisition. At the time of writing, however, just one franchised store remains, located in Bend, Oregon, U.S.A.

This week, news hit the wires of Blockbuster filing a trademark application with the U.S Patent and Trademark Office. According to the trademark filing, Blockbuster plans to issue a digital token in addition to an NFT market place and Metaverse environment.

A move into NFT space and Metaverse could be a headache for companies such as Netflix Inc (NFLX).

Trademark attorney and founder of Gerben Law Firm Josh Gerben tweeted the news, with the headline “Don’t call it a comeback…” 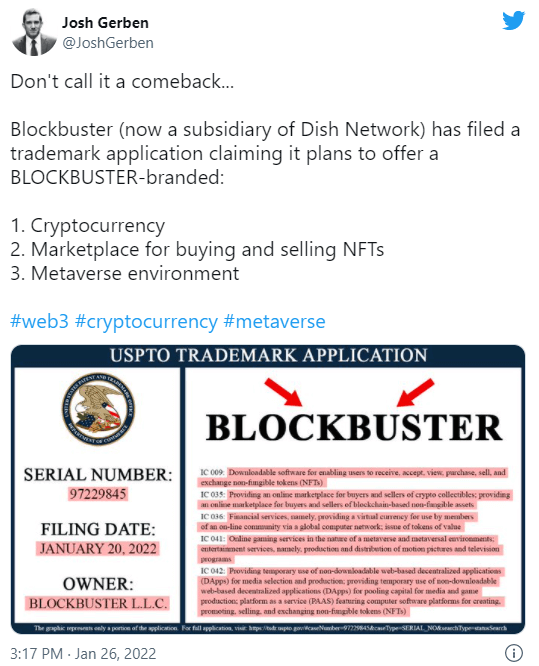 BlockbusterDAO and a Film Industry Revolution

Late last year,  BlockbusterDAO was looking to raise funds to acquire Blockbuster from Dish Network for a sum of $5m. Blockbuster DAO’s goal is to revolutionize the film industry by creating “the first ever DeFilm (decentralized) streaming platform and a main stay of both Web3 brands and products”.

BlockbusterDAO’s vision is likely to be the future of film. Networks would have a say on the final version of scripts and voters could influence casting, film locations, and more. Making all the decisions on blockchain not only brings inclusion, but also transparency and quite possibly a film industry revolution. Such a proposition would test the resolve of studios such as Miramax, Metro-Goldwyn-Mayer, and Warner Brothers.

While there has been plenty of chatter on the BlockbusterDAO Twitter account, there have been no news updates on the acquisition. Just a single tweet last week that a line of communication between Dish Network and BlockbusterDAO has opened.

The Film Industry, NFTs and the Metaverse

BlockbusterDAO’s plans and Blockbuster’s trademark filing come amidst a flurry of activity in the NFT space and the Metaverse.

Since the 17th January, Quentin Tarantino and Secret (SCRT) have partnered to auction a 7 NFT Pulp Fiction set called “Tarantino NFTs”. The first of the 7 NFTs sold for $1.1m at the start of the week.

We also reported mid-month of film makers moving to finance movies with NFTs. Following in the footprints of Blockbusters and Tarantino, new platform FF3 launched this month. FF3 looks to enable the film industry to fund production costs through NFT sales. The platform also plans to share film revenues with investors in addition to allowing investors to collect and sell NFTs.

FF3, Blockbusters, and the likes of Quentin Tarantino will be watched closely by Hollywood’s big-name studios and regulators.

For cryptos, the NFT market place, and the Metaverse, the opportunities are endless.