Bitcoin hovering at $20k: Is it a safe haven now?

Bitcoin buying surged Tuesday morning with the king of cryptocurrency climbing above $20,000 for the first time in three weeks. It settled a hair below the milestone threshold by Tuesday early afternoon.

At the same time, price-wise, its returns are tracking increasingly to gold according to Kaiko Research. its 30-day performance now sits a highs not seen in over a year, raising the question whether investors now view it as a safe haven.

Bitcoin, like gold, finally reached the point where it is viewed by investors has an inflation hedge?

Year to date, bitcoin (BTC-USD) has slumped a whopping 58%, losing more than $500 billion in market cap value with the majority of that decline occurring from April to July. That big slump was sparked by central bank’s decision to goose interest rates and tame inflation.

Bitcoin currently trades at $20,100, nearly 4% rise on the day, flat over the past 7 days and more than 4% higher over the last three months. Following its major selling events through the second quarter, the largest digital coin and other cryptocurrencies has held up better than stocks and gold.

Analysts aren’t ready to say the trend indicates bitcoin’s status as a risk-on asset that trades closest with stocks is meaningful—though they admit its higher correlation to gold could be an encouraging sign for investors seeking portfolio diversification.

To be sure, even if bitcoin isn’t serving as a safe haven, it has proven to perform better than gold and stocks over the past three months and more recently it’s not outside the realm of possibility that some investors could be seeking it to escape volatility in other assets. 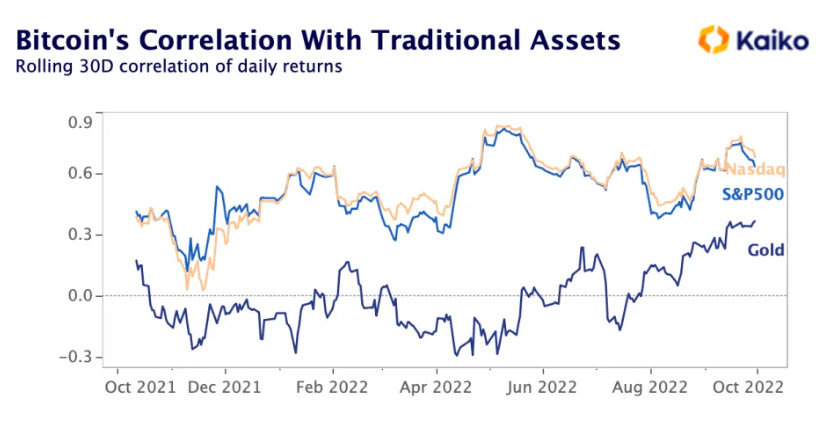 Over the past year, bitcoin has tracked closer to the Nasdaq than gold and while the dynamic has “dropped slightly” over the past two weeks, its still the closest reflection of the digital coin’s performance Clara Medalie, director of research with Kaiko told.

Bitcoin has avoided some of the sell-offs seen in the equities market but it’s “too soon to declare” investors are looking at it as a safe haven, Medalie explained.

“Both Gold and Bitcoin have performed poorly as a safe-haven asset this year amid a strengthening U.S. Dollar and their correlation is more likely linked to Bitcoin’s low volatility,” she added. 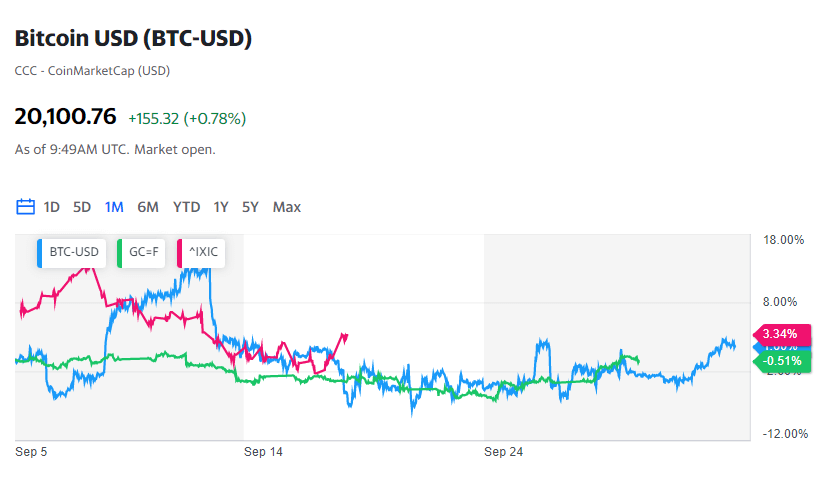 A break with stocks could prove to be more of the effect of bitcoin leading or lagging equities Oanda’s Moya said. Leading doesn’t mean outperforming. Instead it distinguishes the timing for when two assets move in the same direction.

“[Crypto trading] volumes are still low (although picking up), and there are not yet signs of strong retail interest. To believe that [bitcoin’s] store-of-value thesis is going more mainstream,” Acheson added. ” I’d need to see higher volumes as well as higher retail participation.”