Billionaire hedge fund manager Bill Ackman has been urging the Federal Reserve to get serious on inflation since late last year.

Now, he has doubts about the U.S. central bank’s ability to bring price stability down to its target. And thinks stock prices could remain under pressure as rates stay high amid this new environment.

The Pershing Square Capital founder and CEO said Thursday in a quarterly call with investors that interest rates are “meaningfully below where they are going to go.”

“We think that is, of course, a risk for equities,” Ackman said. “And part of our thesis is we think inflation is going to be structurally higher.”

“We do not believe that it is likely the Federal Reserve is going to be able to get inflation back to a consistent 2% level,” Ackman added.

Ackman’s own Pershing Square Holdings is down about 9% year-to-date as of Nov. 15 after paring heavier losses in recent months, while the S&P 500 is down about 18%. In the second quarter of this year, however, the hedge fund shed nearly 25%, its worst quarterly performance since 2016.

Pershing’s latest 13F filing released Wednesday showed Lowe’s (LOW), Chipotle (CMG), and Restaurant Brands (QSR) as the fund’s top holdings. Lowe’s and Chipotle are down about 18% and 12%, respectively, on the year, while Burger King and Popeye’s parent Restaurant Brands is up nearly 11%. 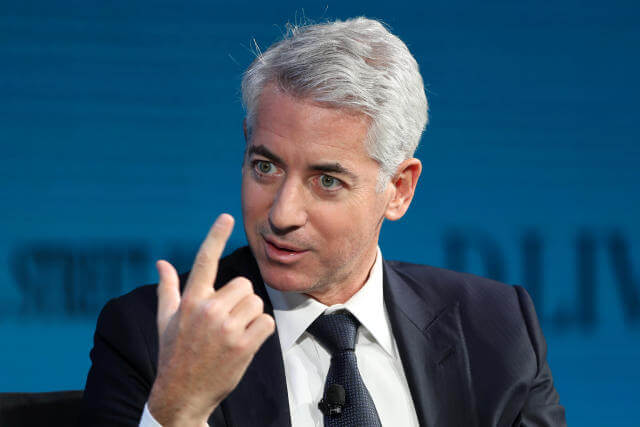 Ackman, who earlier this year supported aggressive Fed action and called for a full percentage point hike in July, thinks geopolitical considerations will keep inflation persistently high, even as policymakers carry out their most combative round of rate increases in decades.

“Supply chain risks that people have become extremely experienced with in the last year or so have made nearly every U.S. CEO rethink outsourced or distant supply chains,” he said. “A lot more of that is going to come closer to home, and it is more expensive to do business here.”

Rising wages globally, the transition to alternative energy, de-globalization, and a shift to domestic sourcing and production will all weigh on the Fed’s ability to bring down inflation, in Ackman’s view.

Fed officials have raised their key benchmark interest rate six times this year, including four-straight increases of 75 basis points between June and November. These moves have brought the Fed Funds rate to a new range of 3.75% to 4%, its highest level since 2008, with further increases expected.

Inflation eased slightly in October from the prior month, but at a 7.7% annual clip, still holds near a four-decade high despite the Federal Reserve’s efforts to get a grip on prices.

Ackman’s remarks on Thursday echo a view that has been growing among some Wall Street strategists: the Fed’s attempts to tamp down demand can’t fix secular macroeconomic shifts like rising real rates, labor shortages, and permanent changes to the global supply chain.

BlackRock’s Investment Institute argued earlier this year that inflationary pressures have been triggered by a broader shift in spending from services to goods, as well as production constraints caused by the pandemic, war in Ukraine, and China’s COVID lockdowns.