Comparing Rivian Automotive (NASDAQ:RIVN) to Tesla (NASDAQ:TSLA) or Lucid Group (NASDAQ:LCID) is one thing. But staging a side-by-side of Rivian to a traditional automaker like Ford (NYSE:F) has starker contrasts.

Ford is transforming itself into a diversified car company and even expects to generate 40% of its revenue from electric vehicles (EVs) by 2030. Now that Rivian is public, EV investors may be wondering if it’s worth buying shares of the new kid on the block or the old dog that’s quickly learning new tricks. Here’s the case for each.

Howard Smith (Rivian): Valuation matters in investing. When stocks are flying high, many retail investors aren’t happy if their stocks don’t double overnight. Rivian’s initial public offering (IPO) last week brought that back into focus. Shares soared immediately, giving the company a higher market cap than an established giant like Ford. Even after a bit of a sell-off, that disparity remains.

For the longer term, Rivian makes a compelling investment, even if it seems overvalued now by traditional metrics.

As a start-up, Rivian is very well capitalized after its IPO. It raised $12 billion on top of prior investment rounds that raised $10.5 billion since 2019. And one of those investors is Ford itself, showing that even the legacy automaker believes there’s a strong investment case here. That in part comes from its other investing partners, including Amazon (NASDAQ: AMZN) and privately held Cox Automotive. Amazon is also a customer-in-waiting with its preliminary order for 100,000 Rivian electric delivery vans. And Cox will support the company with service needs.

Rivian hasn’t proven anything yet. It needs to execute, and its pickup truck and SUV models need to gain a customer following, too. But it also gets to start with a blank slate, without any baggage that could be burdensome when trying to pivot a behemoth like Ford. Rivian isn’t a story about today or even tomorrow. It’s about the long-term future. And while the stock will be volatile along the way, there’s good reason to think it’s worth holding in a portfolio.

Daniel Foelber (Ford): Despite being a pioneer in automobile manufacturing and mass production techniques, not to mention selling more cars in the U.S. in September and October than any other company, Ford is valued at less than half of newcomer Rivian. If you’re scratching your head as to how a company like Ford can be worth less, let alone half of a company that isn’t even delivering vehicles, you aren’t alone. But as Howard said, the simple reason is that some investors believe Rivian will grow faster than Ford, and over time, become a better all-around car company. Since it’s starting from zero, it wouldn’t be surprising for Rivian to have a faster revenue growth rate for several years. And there’s no denying Rivian’s esteemed backing, killer products, and flush cash position is enticing. Recognizing Rivian’s potential, Ford became an early backer in the company. It currently holds around a 12% stake in Rivian. Aside from its Rivian investment, Ford is making moves that shouldn’t go unnoticed.

In its recent third-quarter earnings call, Ford raised its full-year 2021 guidance thanks to a recovery in the semiconductor supply chain. It now expects to earn between $4 billion to $5 billion in adjusted free cash flow (FCF) and $10.5 billion to $11.5 billion in earnings before interest and taxes (EBIT). Despite some alleviated chip pressure, Ford still expects the shortage to carry over throughout 2022 and possibly in 2023.

Ford has several electric concepts in its pipeline. But the two most exciting are the Mustang Mach-E SUV and the F-150 Lightning pickup truck. 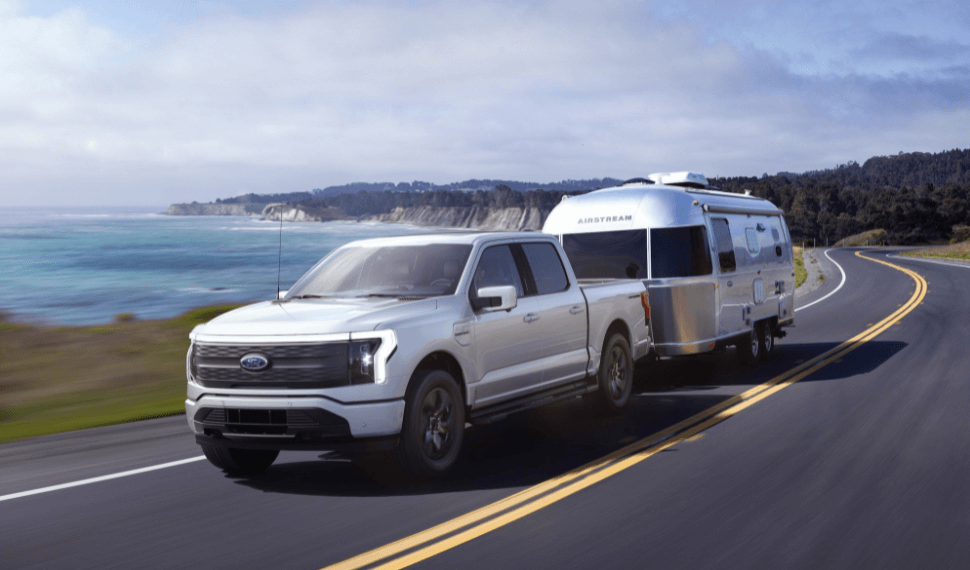 The Mach-E came out in 2020 and has received positive reviews. In its third-quarter earnings call, Ford said that 90% of Mach-E buyers would recommend the car to other customers. Ford estimated global Mach-E demand could be 200,000 vehicles a year in the near future. More importantly, its highly anticipated F-150 Lightning pickup truck has over 150,000 reservations. Ford plans to produce 80,000 of them a year. To do so, it has invested in its Michigan-based Rouge Electric Vehicle Center, Van Dyke Electric Powertrain Center, and Rawsonville Components Plant. The Ford F-150 Lightning is expected to have a starting price of just $40,000 without the bells and whistles and in top trim will have a range of over 300 miles.

In terms of investments, Ford is spending $30 billion on EVs and battery cells by 2025 in order to generate 40% of sales from EVs by 2030. The mid-decade goal is to build 141 gigawatts (GW) of battery production, which Ford says is enough to produce 1 million battery EVs per year. About a third of Ford’s EV investment is going toward Blue Oval City, a $11.4 billion project on several sites in Tennessee and Kentucky that includes twin battery plants and an EV assembly plant. It’s also investing $1 billion in a plant in Germany that will become all-electric by 2023.

An exciting industry worth investing in

Despite being completely different companies, there’s a chance that Rivian and Ford both deserve a place in your portfolio. Rivian is an exciting electric car company with a lot of growth, while Ford is a steadier, more established automaker that’s set on becoming a leader in the EV truck market. Although we disagree on which is the better buy, there’s no denying that the EV industry is quickly gaining traction in the U.S. and is poised to sustain its growth over the long term.