Shares of Teladoc (TDOC) crumbled on Thursday after the company reported dismal earnings for the first quarter. The 47% drop in shares of the telemedicine provider was a big blow for Cathie Wood’s ARK, which invested heavily in the stock.

Adding To Its Losses

The crash in TDOC couldn’t have come at a worse time for ARK. The issuer’s ETFs were already reeling from a yearlong bear market in high growth stocks. Just on Tuesday, the flagship ARKK hit a new two-year low. This morning, it’s down another 7%, bringing its peak-to-trough losses to more than 70%. ARK’s other funds have seen similar declines from their highs. 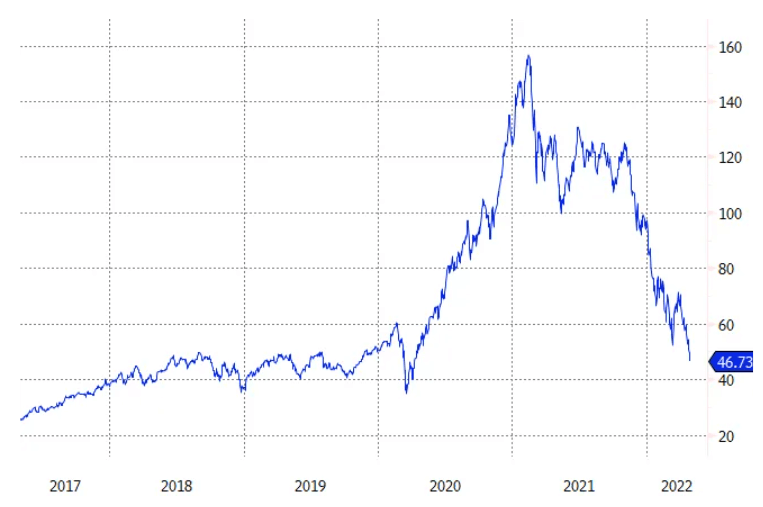 At the Exchange ETF conference earlier this month, ARK’s Cathie Wood pushed back on the idea that stock concentration increases risk.

“During risk-off periods, we always concentrate our portfolios towards our highest-conviction names. Most people assume that concentration increases risk; I don’t think that’s the case,” she said.

In recent years, ARK had benefited tremendously from its big, bold bet on Tesla—a contrarian call that paid off in spades. The saga of Teladoc is the flip side of that and brings to light how dangerous stock concentration can be if things go wrong.

Teladoc reported earnings in Q1 that missed on both the top and bottom line. The firm said that revenues grew 25% year over year to $565.4 million, below the $568.9 million that analysts were expecting. Earnings per share came in at -$41.58, well below the -$0.62 expected, though that was largely due to a write-down of assets related to its acquisition of Livongo in 2020.

Perhaps most importantly, the company cut its outlook for sales in 2022 from a midpoint of $2.6 billion to $2.45 billion, citing increasing customer acquisition costs and elongated sales cycles—both, presumably, due to increasing competition.

Analysts at Citi warned that the results “reveal cracks in TDOC’s whole health foundation as increased competitive intensity is weighing on growth and margins” and that they “are doubtful that we will see the competition-driven headwinds abate anytime soon.”

Meanwhile, analysts at Piper Sandler were a bit more optimistic on the stock due to valuation. “There is a price for everything,” they said. TDOC currently trades at 2.2x this year’s sales, equal to its all-time low valuation from 2016.