Apple, whose stock is perched at a record high, is inching closer to becoming a $3 trillion company as Wall Street gets bullish on its future.

The tech giant saw its shares jump more than 3% following Morgan Stanley’s Kathy Huberty note to investors about raising price target from $164 to $200. Huberty argued that it’s time to consider the company’s plans to launch an augmented reality product and self-driving car in the next few years.

With the holiday shopping season in full swing — and consumers rushing out to buy the latest iPhone as gifts for themselves and relatives — he’s forecasting a $191 price target over the next 12 months. That is about 16% higher than their current price.

“The key competitive advantage for the company is really in its large and, and still growing user base, particularly on the iPhone side,” Nispel told  on Tuesday.

“That user base really fuels Apple’s competitive advantage in that its ecosystem continues to grow and it becomes very important for the longer terms story,” the analyst added.

The global semiconductor shortage has impacted the automotive and tech industry, causing Apple to tell its suppliers this week to cut production for the iPhone 13 to about 80 million units from 90 million units. However, Nispel remains optimistic about consumer demand, even amid surging inflation and supply shortages.

Even with some of the supply chain disruptions: “all of that suggests that demand for the iPhone is still really strong,” the analyst told.

“It’s really driven by the active user base and we think the user base continues to grow at, call it 7%, which on a base of a billion that’s really key,” Nispel said.

A car, and maybe glasses? 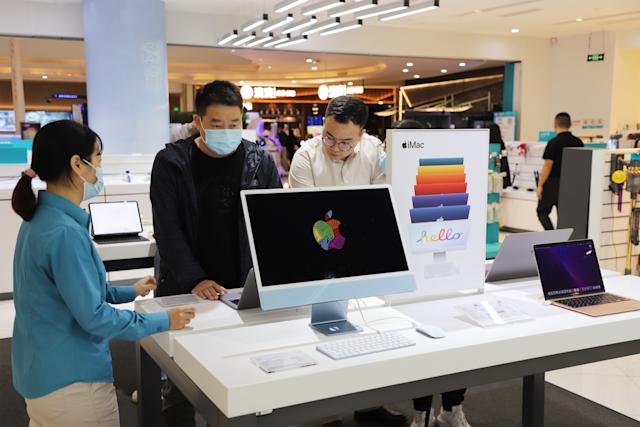 Meanwhile, Apple has been pushing internally for a 2025 deadline for an autonomous vehicle, according to reports. The tech giant has been mum, but its potential entry into the autonomous vehicle space has been a hot topic of speculation among Wall Street analysts — if it doesn’t go all in on augmented reality glasses first.

Yet Nispel is a bit more sanguine about the reports, saying KeyBanc wants to be “able to touch and feel, at least see a product before coming to a conclusion on how to value it.”

He added: “A car makes a lot of sense. Apple’s user base, that’s still growing, they have fanatic customers. So that user base is gonna most likely purchase any product that Apple comes out with.”

In addition, Nispel pointed out that the company’s international segment is growing faster as other countries adapt to 5G. For example, the share of iOS adoption is 19% in China.

“China was Apple’s fastest growing market last year and their market share is still really low comparatively, if you look at iOS market share in the U.S., which is closer to 55% than in Japan, it’s closer to 70%,” Nispel said.

While Nispel sees potential catalysts for Apple’s business that could drive its share price higher, he recognizes Apple’s App store legal battles will continue to be a sticking point for investors.

“We’d expect some modest more regulation and some concessions by Apple, but we still project the services business to grow close to $100 billion in the next three years,” Nispel said — calling it “pretty remarkable.”