Apple (AAPL) has announced a “self-service repair” scheme to allow customers to fix their own apple products including iPhones and Macs for the first time ever.

This means that individuals and independent repair shops will have greater access to the parts and tools needed to fix Apple electronics.

Apple’s new online repair store will sell more than 200 parts and tools as part of the programme. This will be available first for the iPhone 12 and iPhone 13 models, soon to be followed by Mac computers featuring M1 chips, according to Apple.

Apple said: “Self service repair is intended for individual technicians with the knowledge and experience to repair electronic devices. For the vast majority of customers, visiting a professional repair provider with certified technicians who use genuine Apple parts is the safest and most reliable way to get a repair.”

Apple has often been criticised as a strong opponent of the “right-to-repair” movement, claiming safety issues.

The move comes after the grassroots right-to-repair movement, which wants independent repair shops and people at home to be able to fix their own devices, has put increasing pressure on the technology giant. 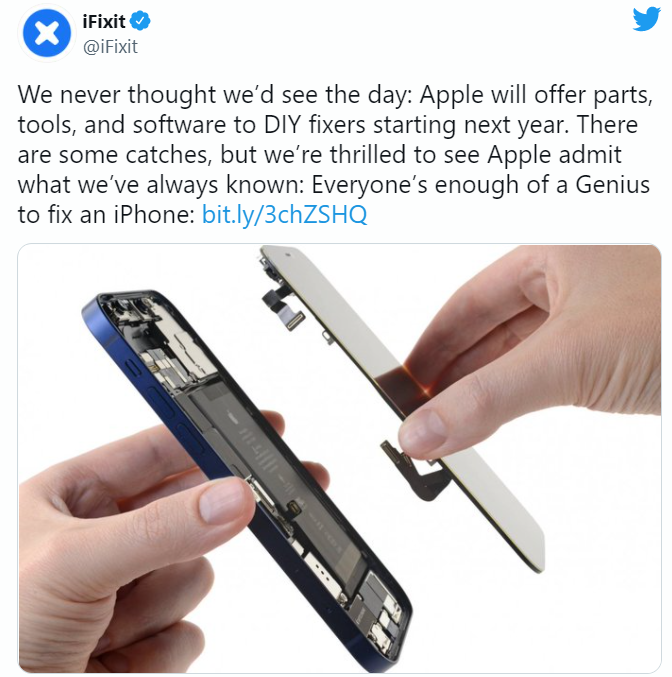 “Apple has long claimed that letting consumers fix their own stuff would be dangerous,” iFixit said in a statement to media.

“Now, with renewed governmental interest in repair markets — and soon after notably bad press… Apple has found unexpected interest in letting people fix the things they own,”

Last week, iFixit flagged an issue with the iPhone 13 that meant that screen repairs performed by unofficial parties broke its Face ID feature due to a chip that “pairs” a screen with a specific phone and requires special software tools to “match” a new one.

Apple said the programme would allow individual customers to “join more than 5,000 Apple authorised service providers and 2,800 independent repair providers who have access to these parts, tools, and manuals”.

“In the past three years, Apple has nearly doubled the number of service locations with access to Apple genuine parts, tools, and training, and now we’re providing an option for those who wish to complete their own repairs.”

Apple’s authorised repair schemes have long been criticised for having extensive terms and restrictions such as where the replacement parts come from — making it difficult for components from a broken phone to be obtained and “transplanted” for repair.

Earlier this year, Apple co-founder Steve Wozniak — who built the first Apple computers in a garage with Steve Jobs in the 1970s — said he supported the right-to-repair movement.

“We wouldn’t have had an Apple had I not grown up in a very open technology world,” he said in July.