Apple stock has made a huge move higher — is it time to sell?

A top Wall Street analyst thinks Apple’s stock (AAPL) is at risk of an earnings day sell-off, which would ultimately be a buying opportunity.

“Apple shares are up 19% since the October 4 low (vs. 5% for the S&P 500) suggesting December quarter upside is largely priced in,” warned Morgan Stanley tech analyst Katy Huberty in a new research note Thursday. Huberty expects Apple to report a better than expected quarter on Jan. 27, and guide to a relatively in line March quarter.

If the stock falls on the results — which would extend a 9% slide year-to-date — Huberty believes it would be a good entry point into Apple given several key elements.

The analyst views Apple “as a more defensive/quality outperformer in challenging markets given a 1.65 billion plus installed base with high loyalty/retention rates, underweight institutional positioning, strong capital returns, and the tendency for Apple to outperform ahead of product cycles (iPhone SE3 in April/May 2022, iPhone 14 in Fall 2022, and a MR Headset in 2023).”

Huberty rates Apple shares at an Overweight, or the equivalent of a Buy with a $200 price target. 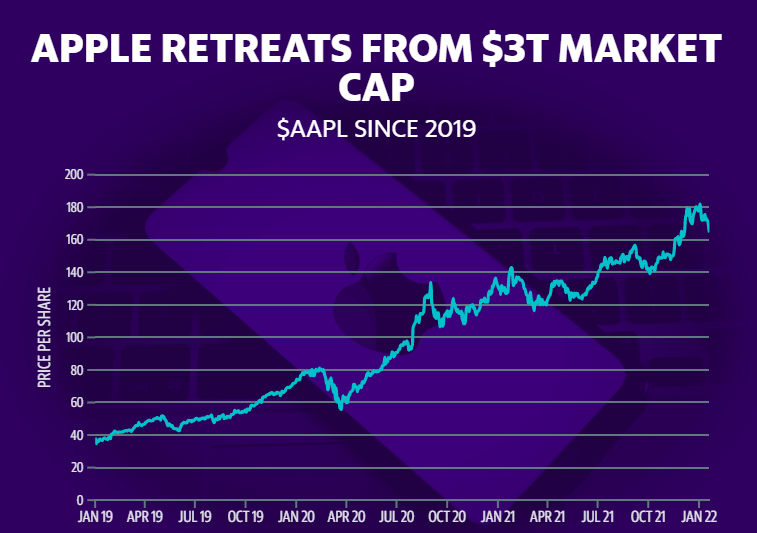 Despite its impressive fundamentals, Apple’s stock has been swept up into the selling in big-cap tech names ahead of rate hikes from the Federal Reserve.

The Nasdaq Composite fell into correction territory on Wednesday, otherwise known as a decline of 10% or more from a recent high. High multiple tech stocks besides Apple continue to be under severe pressure, notably fintech player Block (formerly Square) which is hovering around a 52-week low. Shares of Roku have crashed 52% in the past three months.

Other pros on the Street think one should be poised to pounce on Apple soon.

“So many times Apple is seen as a defensive stock. We noticed that over the last maybe six weeks when a lot of other tech names were down, Apple continued to do well. If you don’t have it in your portfolio — we are longer-term investors — wait for that pullback and add some of that to your holdings for more of the base holding in your portfolio,” Crossmark Global Investments chief markets strategist Victoria Fernandez said.