Apple stock is making 52-week lows for a second session. Here are the levels to know right now.

This is not too surprising, as the tech giant broke below a key support level earlier this month. And on Wednesday Apple shares fell 2.6%, touching 52-week lows for a second session.

If the stock closes lower today, it will mark Apple’s ninth decline in the past 10 sessions.

Despite its robust financials, investors earlier this month may have had a problem paying roughly 25 times earnings for flat earnings and revenue growth this year.

IPhone reports also raise a bit of concern amid Apple’s busiest quarter, while unrelenting selling pressure in tech is bound to weigh on the largest company in the U.S.

While Apple has held up the best among FAANG stocks when measured from the one-year highs, Apple stock has performed the worst in the group over the past month, down over 14%. 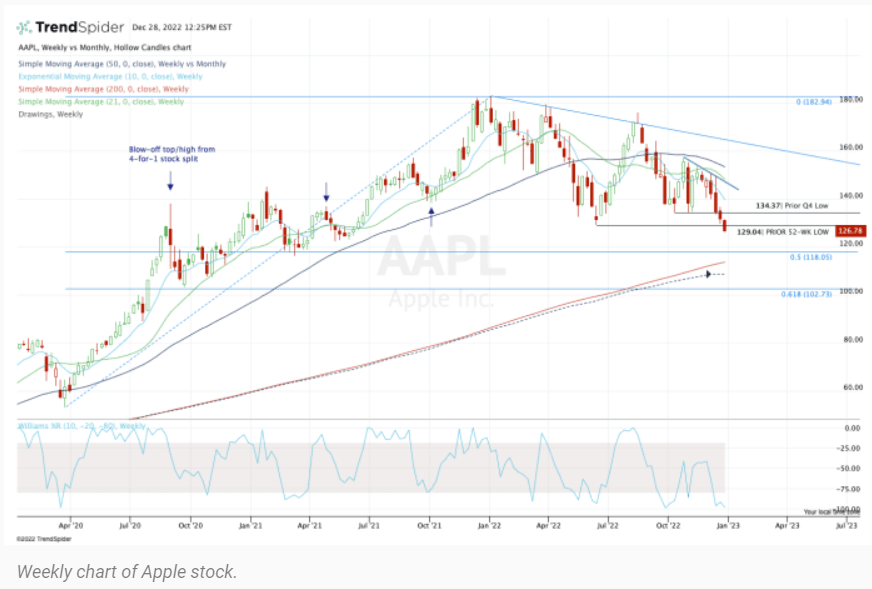 Just going by the figures above, we could say a 35% to 40% correction is not unheard of for Apple. Its current peak-to-trough decline in this rout is 30.9%.

While Apple could bottom today and rally throughout 2023, history says that it wouldn’t be unusual to see a further decline. When we pair it with the charts, a few levels jump out.

First, the $118 to $120 zone stands out, with the latter being a key pivot in 2020 and in early 2021. With the 50% retracement from the all-time high down to the covid low coming into play at $118, this would be a logical area for some long-term investors to consider adding some exposure.

In that range, the shares would be down 35% from the high.

Other investors may consider waiting for a test of the 200-week moving average, which is currently rising, but near $114.

Now, this measure is notable since it’s been major support in every one of the corrections listed above, except for the covid correction (as Apple stock did not dip far enough to test this measure).

If Apple tests this level, long-term investors may truly want to consider adding some exposure, given the dependability of this moving average.

Keep in mind that Apple stock may truly not fall this far — and that’s a scenario buyers must watch out for. They also must be prepared for the possibility that the $114 to $120 area doesn’t act as support, either.

If the selling becomes an avalanche, the 61.8% retracement and $100 to $105 area is a possibility. For what it’s worth, Apple would be down about 44% from its highs at that point.

Keep these levels in mind if you’re stalking a long position in Apple stock.