Apple: Is Advertising the Next Big Revenue Generator?

The Apple (AAPL) empire might be spearheaded by its flagship product, the iPhone, but along with plenty of other hardware offerings, its Services segment has been growing at a fast pace. There’s also talk of a “game changing” AV/VR headset and even of an Apple Car at some point.

“We believe AAPL is in the early stages of building a new mobile advertising platform,” says Martin, who thinks ad revenue could be a “material upside value driver” for the tech giant for several reasons.

For one, there’s the offensive element. Apple being the largest company in the world, to keep on growing it must focus on big global TAMs (total addressable markets). As eMarketer expects the global digital advertising market to reach $600 billion this year, it certainly qualifies as one.

There’s also a defensive element, as explained by Martin: “Creating a privacy-first ad platform would solve a problem for AAPL’s ad-driven apps which have seen their ad revs fall after iOS replaced IDFA with ATT in 3Q21.”

It also amounts to a clever tactical move. Apple operates as a “Walled Garden” and its user data is “best-in-class.” All the while, it is also reducing the tracking and transparency data accessible to other companies. This gives the company’s “pricing power” a boost.

Martin is not just speculating on the matter. There’s evidence of Apple’s advertising ambitions, as the company’s recent job postings imply a new AdTech platform is being built. Since the early months of the year, there has been a notable increase in the company’s recruiting activity for its Ad Platform unit. Just recently, Apple put up a job opening for “a senior manager for its DSP in its ads platforms business who will drive the design of the most privacy-forward, sophisticated demand side platform possible.” Moreover, Apple made its presence felt during June’s Cannes Lions advertising festival. This suggests to Martin, the company is trying to “drive awareness among marketers that it is in the advertising business.”

So, down to the nitty-gritty, what does it all mean for investors? Martin reiterated a Buy rating on Apple shares, backed by a $170 price target, suggesting shares are fairly valued right now.

The Street’s average target is a touch higher; at $180.11, the figure leaves room for a 9% upside from current levels. All told, based on 22 Buys, 6 Holds and 1 Sell, the stock claims a Moderate Buy consensus rating. 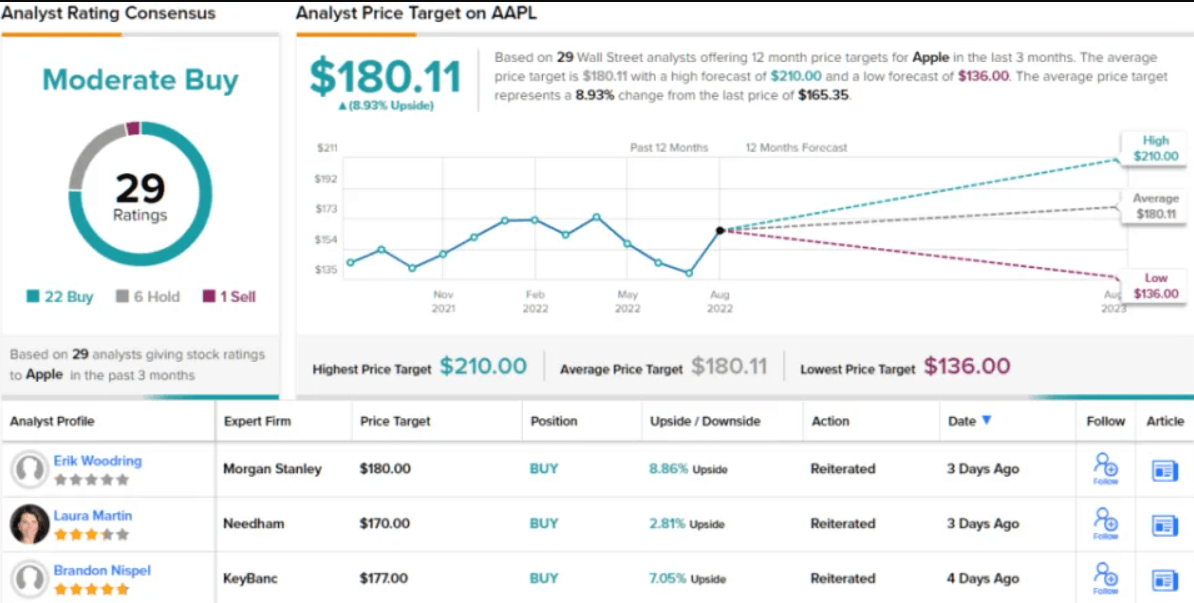