Earnings season is now in full swing, but most of the big hitters at Wall Street’s quarterly extravaganza will report the period’s financials next week. And so will the biggest of them all; Apple (AAPL) will deliver its third fiscal quarter results (June quarter) after the close on July 28th (Thursday).

Wedbush’s Daniel Ives thinks Apple will be able to meet expectations despite the “albatross” hanging round its neck. Recall, according to the company’s guidance, the Covid lockdowns in China are expected to “negatively impact” revenue to the tune of $4 billion to $8 billion in the quarter. However, despite the ongoing supply issues that have afflicted Apple – and others in the tech sector – iPhone demand is “holding up slightly better than expected.”

In any case, the 5-star analyst went on to add, the Street is “well aware of weakness this quarter and we believe ultimately is looking past June numbers to the September and December quarters with all eyes on the iPhone 14 production/demand cycle for the Fall staying on track.”

Here, Ives believes Apple’s plan for the latest version of its flagship product is to initially match the iPhone 13’s performance, or “flattish,” which to the analyst indicates Apple is confident there’s enough demand for the new handset “despite the jittery macro.”

While Ives claims investors are still underestimating the “stickiness of the iPhone upgrade cycle,” he also emphasizes the ongoing strength of another segment.

Services are expected generate annual revenues of $80 billion this year, and into 2023 are anticipated to climb at a “steady ‘double digit’” rate. To Ives, as the company navigates through the market storm, this key revenue stream is at the heart of Apple’s multiple and “growth story.”

In fact, Ives thinks that based on growth and EBITDA, the services segment on its own is worth more than $1 trillion and combined with the flagship hardware business presents a “very compelling” risk/reward case at current levels.

Accordingly, Ives reiterated an Outperform (i.e. Buy) rating on Apple shares, along with a $200 price target, suggesting shares will be changing hands for ~29% premium a year from now.

The Street’s average target is not quite as high, yet at $182.12, the figure leaves room for ~17% share appreciation over the coming months. Rating wise, based on 22 Buys vs. 6 Holds, the consensus view is that AAPL is a Strong Buy. 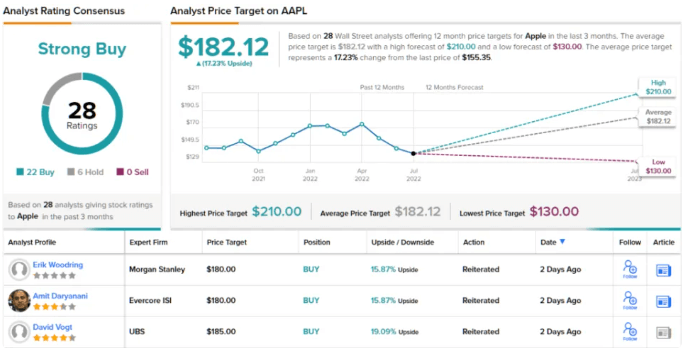