AMC’s ticket experiment for ‘The Batman’ seems to have worked

AMC (AMC) raised ticket prices for “The Batman” — an experiment that the company publicly declared it was testing in the U.S. as the theatrical experience gravitates toward a more premium one.

But did elevated ticketing work, and could we see more higher prices as a result?

According to box office analytics platform EntTelligence, AMC charged about $1 more than its average ticket price to see “The Batman” during the film’s opening weekend on March 4 ($14.50 vs. $13.66) with price increases fluctuating between $1 to $1.50 depending on the location.

Although novel to the U.S., AMC’s experiment wasn’t necessarily “new” as the theater chain had already been implementing price variations across Europe.

Additionally, competitors like Cinemark (CNK) and Regal quietly hiked prices for, not only “The Batman,” but also “Spider-Man: No Way Home’s” opening weekends.

“I think it was a success with smart pricing, and was well thought through — ‘The Batman’ was the right movie to test this with due to its high demand,” said Steve Buck, chief strategy officer at EntTelligence.

Comscore Senior Media Analyst Paul Dergarabedian agreed, adding that dynamic pricing has been in the industry for some time — from special prices for matinees to discounted rates for kids’ tickets.

Consumers “shouldn’t really be surprised” when prices go up, the analyst explained. “Every other business is doing it.”

Dergarabedian cited consistent price hikes within the streaming space (most recently, Netflix (NFLX) increased the cost of its subscriptions across the U.S. and Canada) as a prime example of how users are willing to pay extra bucks for content.

“We’ve just all become accustomed to these incremental increases in costs for various goods and services that we all enjoy,” he said.

The analyst went on to add that he doesn’t see “under $2 price increase for certain movies [as] a huge risk.” He surmised that higher prices will likely be a “case by case basis” but that the risk “would come if that suddenly was a much higher up-charge.”

The slight price hike was not enough to deter consumers from seeing the movie (even within an inflationary environment) as foot traffic soared amid increased ticket sales.

Visits to AMC locations during the film’s opening weekend significantly surpassed both 2019 and 2020 levels, according to analytics firm Placer.ai — rising 24% and 68.4%, respectively.

Furthermore, EntTelligence data revealed that 22% of moviegoers opted to see “The Batman” in a premium format on opening weekend (i.e. Dolby screens and IMAX theaters) — a sign that consumers sought out more expensive and higher-end experiences.

“Some movies create that sort of excitement to see it it in this format … For others, that type of demand is not there, but it certainly was in the case of ‘The Batman.’ Circuits recognized that and maximized the profits,” EntTelligence’s Buck explained.

He added that the movie theater is still one of the least expensive forms of entertainment, relative to other in-person events like live sports and concerts. 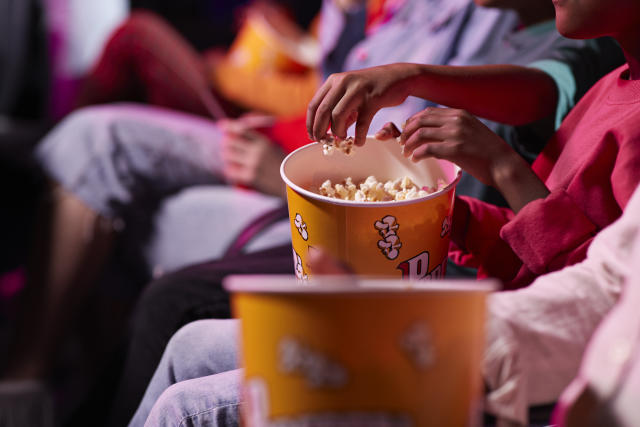 “While IMAX doesn’t set ticket prices, the biggest change we’ve seen is that the studios are more open to exhibitors implementing surge pricing than they have been in the past. Ultimately it will be up to the consumer to accept or reject higher prices, but early indications are that they are willing to pay more to see the biggest must-see blockbusters on opening weekend.”

Although one concern is valuing certain films over others, the industry is operating in a “very blockbuster-centric world” as those are the films that have helped theaters bridge the gap between 2019 and this post-pandemic environment, Dergarabedian said.

“Theaters are doing what they have to to bolster their bottom line,” the analyst continued, noting that the box office is still “half of what it was in 2019” amid various pandemic-induced headwinds.

Still, “studios have realized that the movie theater experience is second to none, in terms of both the impact that the viewing experience has and also the short and long-term financial benefit of a big theatrical release for a movie that can generate big box office.”

Overall, “The Batman” grossed an impressive $128 million during its domestic opening weekend — the second best opening of the pandemic era behind “Spider-Man: No Way Home’s” $260 million.

To date, the Warner Bros. film has surpassed $300 million domestically with more room to run.