After the Bull Run: Is Another Seismic Bitcoin Crash on the Horizon?

2021 saw all-time highs broken throughout the year followed by a series of harsh corrections. Today, as we head towards 2022, it’s worth asking whether another major Bitcoin crash is on the horizon, or if BTC will enjoy a stronger end to Q4.

Bitcoin is a famously volatile asset, but following a series of good news surrounding major institutional acceptance, it was hoped that more stability would be secured across the cryptocurrency market.

These hopes were dashed in April 2021 as Bitcoin shed more than 50% of its value in the space of little more than a month. 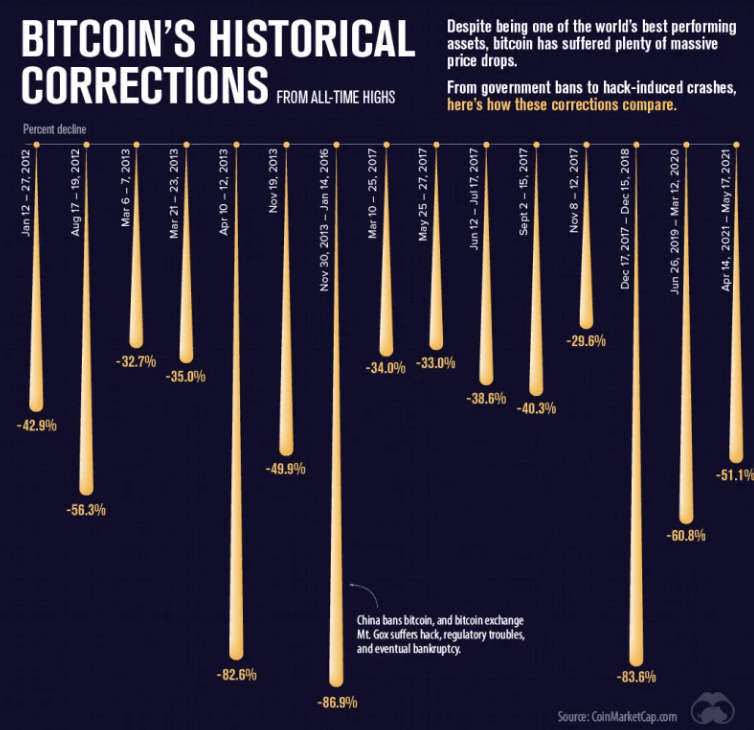 As Visual Capitalist data shows, the correction may have shaken up plenty of 2021’s newcomers to the crypto market but the scale of the crash corresponded with the coin’s history of significant price drops – with the current record dip standing at some 86.7% between 2013 and 2016. 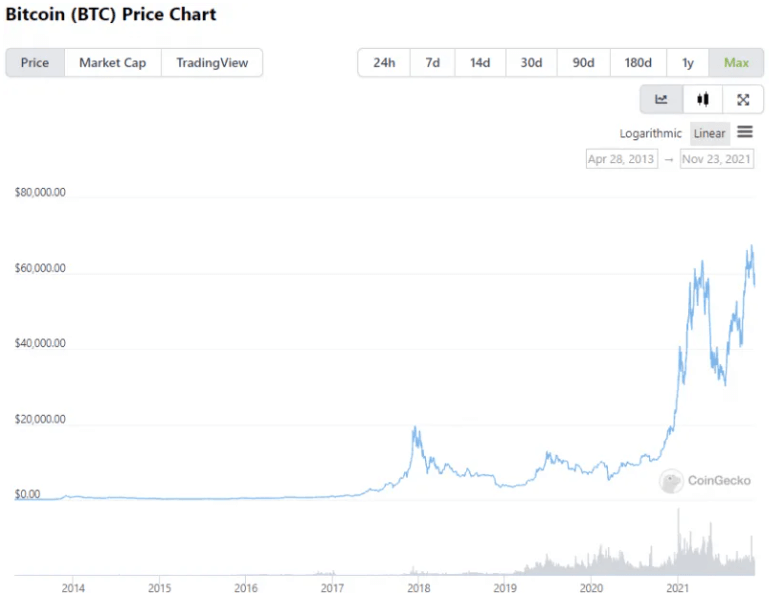 As the table above shows, despite its long history of crashes, Bitcoin has still been extremely successful in terms of its impressive rallies and price accumulation.

At present, Bitcoin sits near its all-time high price, but there appears to be little clarity on what the world’s oldest cryptocurrency will do next. Whilst some speculators are expectant of a major bull run, the disappointing performance of BTC in recent weeks has led to others predicting the beginning of a sharp downturn and bear market. With this in mind, let’s take a look at the history of Bitcoin to see if we can identify whether a crash may be on the way:

Arguably the most important quality that Bitcoin has in relation to most other cryptocurrencies is its scarcity. When Bitcoin’s pseudonymous creator, Satoshi Nakamoto, built BTC, he opted to program the asset to undergo a ‘halving’ event every four years in a move that would continually halve the number of BTC rewarded to miners over time.

These halvings have occurred three times in the past, in 2012, 2016, and most recently in May 2020. Halving events are programmed to occur within BTC continually as the asset reaches its capped circulation of 21 million coins.

As the chart above shows, the scheduled ramping up of Bitcoin’s scarcity traditionally sparks significant bull runs that can see the coin make significant gains on its value. However, we can also see that the bull run peaks are always followed by heavy crashes.

However, it’s also worth adding that Bitcoin’s next halving event, scheduled to arrive in 2024, is likely to trigger another price run that may see the value of the asset climb beyond its 2021 peaks, despite the significant volatility that will inevitably fall in between. 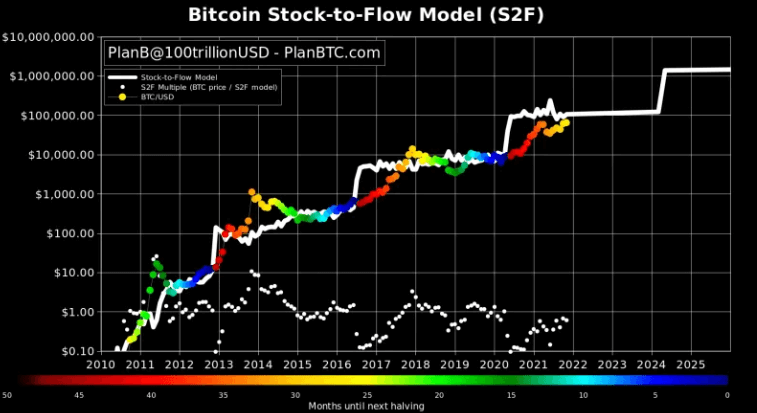 The chart above analyzes Bitcoin’s stock-to-flow model (S2F). In a nutshell, stock-to-flow has emerged as a popular model that looks at how scarcity can generate value. It’s the ratio of the current stock of an asset and the flow of new production.

Mapped out by crypto market commentator PlanB, we can see that – even when accounting for its crashes – BTC generally follows its stock-to-flow model over time. Although we can see that 2021’s bull run is yet to peak above its S2F in 2021 in a similar way to all of its past halving cycles. This implies that the cryptocurrency may yet climb higher in value in the short term before a correction drives it back towards familiar territory.

What will happen to BTC?

So, what will happen to Bitcoin? Is a seismic crash inevitable over the coming months? PlanB’s stock-to-flow model indicates that Bitcoin’s halving cycle is yet to run out of steam, which may result in a short-term price rally towards a peak of around $100k. However, as we can see from the history of the coin, a crash is inevitable also – though BTC has never dipped below its pre-halving prices.

“There is a risk to “run up against” FOMO, which, together with substantial volatility inherent to crypto-assets, can lead to a reasonably strong pullback in case of a decreased risk appetite and the absence of a breakout of the inclined channel,” warns Maxim Manturov, head of investment research at Freedom Finance Europe. “Therefore, one should be careful at current levels and understand the speculative nature of such assets.”

However, Manturov also added that Bitcoin has been enjoying more prominence of late owing to the asset’s strength in the face of rising inflation rates globally: “Overall, the recent bitcoin rally reflects the broader use of the coin as a hedge against inflation and the availability of enormous liquidity in the markets due to low rates and QE,” he confirmed.

Fundamentally, Bitcoin’s short term potential will be governed by the highly speculative market that it’s a key part of. However, investors should be wary of an upcoming correction. In the case of BTC, the future may not be written, but it’s certainly coded into the framework of the coin.