Adobe: The Dip Has Presented an Opportunity

Shares of Adobe Inc. (ABE) have fallen nearly 32% year to date, outpacing the decline in the S&P 500 Index.

The company recently reported earnings results that topped market expectations, but guidance for the current quarter and full year came in lower than Wall Street analysts had anticipated.

Still, Adobe is a fundamentally sound company. Even with lower-than-expected guidance, the company is experiencing significant growth. Because of the sell-off in the stock, Adobe is now trading at a substantial discount to its intrinsic value, which could make now a good entry point into the name.

Lets look closer to see why Adobe could be one of the best values in the market.

Adobe provides software products that allow for customers to create, share and transfer electronic documents. The company is composed of three segments, including Digital Media, Digital Experience and Publishing and Advertising. Some of its best-known products include Acrobat, Illustrator and Photoshop. The company is valued at $183 billion and generates annual revenue approaching $16 billion.

The company announced earnings results for the second quarter of fiscal 2022 on June 16. Revenue grew 14% to $4.39 billion, beating analysts estimates by $40 million. The companys adjusted earnings per share of $3.35 compared to $3.03 in the prior year and was 4 cents better than expected.

The company experienced growth in nearly every business.

Publishing and Advertising fell 17% to $91 million.

Adobe provided guidance for the third quarter and fiscal year as well. For the current quarter, the company expects revenue of $4.43 billion and adjusted earnings per share of $3.33. Both figures were slightly below consensus estimates.

Of the three segments, only Publishing and Advertising had a year-over-year decline, but it is not a major contributor to overall results for Adobe. The larger and more important businesses had double-digit increases. Results also followed really good numbers in the prior year. For example, in the second quarter of 2021, Digital Media improved 25%, while Digital Experience grew 21%.

Adobes recurring revenue is reaching new heights, with leadership noting the company is seeing high engagement and retention rates across all customer types, from individuals to enterprises. Digital Experience subscription growth remains very strong and provides the majority of revenue for that segment. With continued engagement and retention rates, these areas of Adobe appear to have further room to grow as well.

On the other hand, Adobe has long been valued as a high-growth company. According to Value Line, the stock has an average five-year price-earnings ratio of almost 53. Slowing growth often causes a negative reaction for stocks with such a lofty multiple.

Leadership did lower guidance for the current quarter and full year, but these projections are still considerably better than the prior years results. If the company were to achieve its revenue and earnings per share targets, then growth would be 12% and 35%.

Top-line performance is expected to be negatively impacted by currency exchange rates, a higher effective tax rate, an extra week in the prior year and the companys ceasing of activity in Russia and Belarus. Many of these factors are outside of the companys control, but updated guidance shows Adobe expects this fiscal year to be its best ever.

In addition to strong growth rates, Adobe has posted good scores on many metrics. 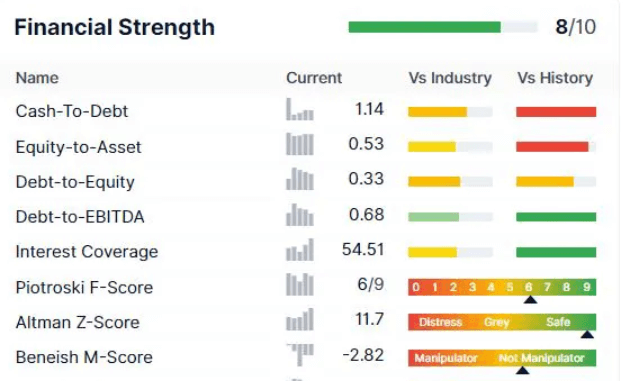 Adobe receives an 8 out of 10 on financial strength from GuruFocus. The yellow bars show the company’s cash-to-debt, equity-to-assets and debt-to-equity ratios are in the middle of the pack in the software industry and near the low end of the companys 10-year history.

However, Adobe has put up much better scores in most other areas. Interest coverage is middling compared to peers, but at the very high end of the companys long-term track record. The Altman Z-Score says the company is very unlikely to reach bankruptcy, while the Piotroski Score is solid.

Adobe has a high return on invested capital of 21.4%, which compares favorably to its weighted average cost of capital of 7.7%. The company is successfully turning its investments into business tailwinds.

Profitability is where Adobe shines brightest. 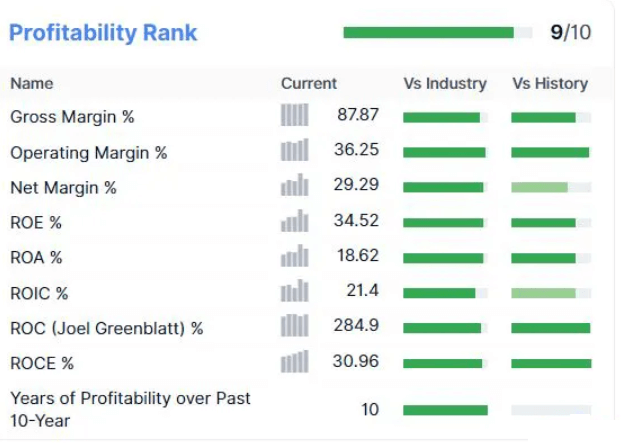 Here, the company receives a 9 out of 10 rating. Adobes scores on almost every metric are ahead of 90% to 95% of its peers. At the same time, these scores are near the very top of its 10-year performance. This means the company is one of the most profitable businesses in its industry and that it has rarely, if ever, performed better over the last decade. 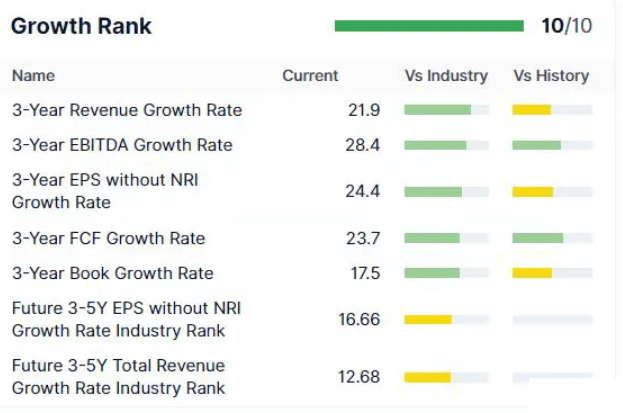 Adobes growth rank is 10 out of 10. Three-year historical results are in the middle of the companys historical record, but do top between two-thirds to three-quarters of the software industry. The companys weakest showings versus the industry come on future three- to five-year growth rates, likely due to a reduction in guidance for this fiscal year.

Long term, this will be something investors will want to watch, but, as discussed above, the reduced guidance still would be up double-digit percentages from the prior fiscal year.

Adobes top scores lead to an impressive GF Score of 95 out of 100. 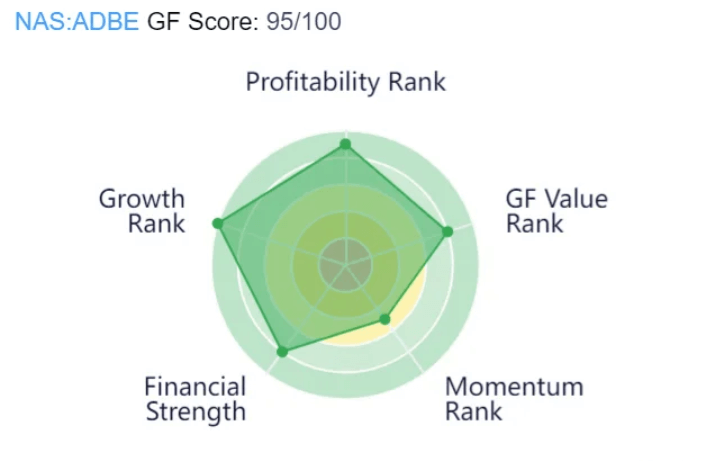 There are just a few companies in the marketplace with a higher score.

Following the steep sell-off in the stock, Adobe is now trading at close to 29 times forward earnings. The average multiple is in the low 50s over the last five years, making the stock undervalued on a historical basis.

The GF Value Line shows Adobe now appears to be trading at a very steep discount to its intrinsic value. 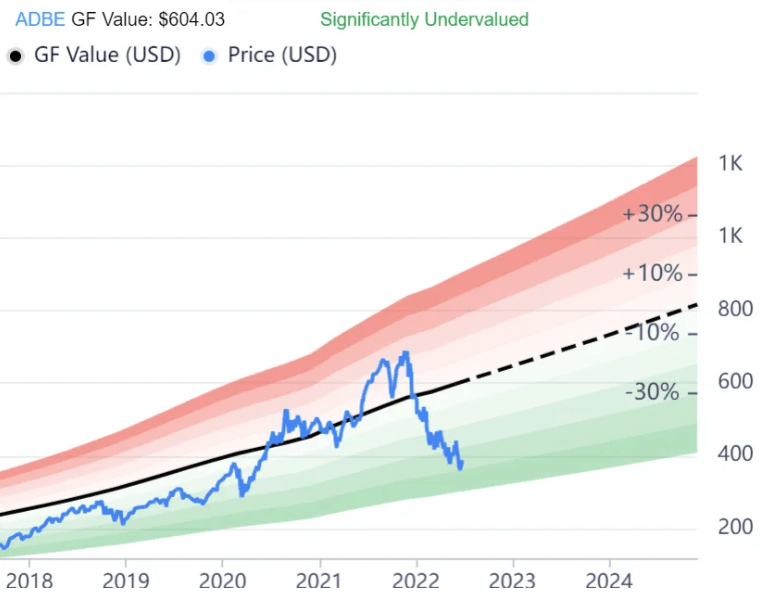 Adobes metrics show it is one of the most well-run businesses in the market. The company is seeing good growth in its most important areas and its subscription model continues to grow at high rates.

The stock has fallen victim to the market-wide sell-off, but its reduced guidance for the remainder of the year has not done the stock any favors. Adobe is expected to post record revenue and earnings figures despite headwinds impacting the business.

To be fair, the stock might not reach its GF Value without Adobe topping estimates, raising guidance, a market-wide improvement in investor sentiment or some combination of all three.

That being said, the valuation, from both a historical and intrinsic perspective, has rarely look as attractive as it does now. This suggests that investors could see rich rewards acquiring shares of Adobe at the current price.