Inflation burned consumers in 2022. Prices rose faster than wages, on average, eroding the typical shopper’s purchasing power. Some things got so expensive buyers simply gave up.

Consumers ought to get some revenge in 2023. Overall inflation has been slowing, from a peak of 9% in June to 7.1% in November. In coming months, there should be disinflation, or a declining rate of inflation, in many categories of goods and services. In some categories there will be deflation, or an outright drop in price levels. In the charts below, these trends show up as a declining rate of year-over-year inflation toward the end of 2022. By the end of 2023, many and perhaps all of those charts will show negative year-over-year inflation, or deflation. Here’s where to watch for important price declines:

Real estate. Forlorn buyers priced out of the housing market during the last two years may perk up in 2023. Home prices have already started to fall on a month-to-month basis, according to the S&P/Case-Shiller index and a variety of other indicators. The Case-Shiller index peaked in June and has since fallen four months in a row, with October prices the latest available. The reasons are well understood. Spiking mortgage rates, driven by the Federal Reserve’s interest-rate hikes, have slashed housing affordability and driven buyers to the sidelines. Crumbling demand has started to bring prices down from the record highs of the COVID pandemic.

Since real-estate repricing has just begun, it could go on for a while. It’s very unlikely home prices will crash as they did after the 2003-2006 housing bubble, when average prices fell by 27% nationally — and by more in the frothiest regions. But prices have only fallen 3% so far, after a 26% spike from the start of the COVID pandemic to the peak in June. If home prices fell back to the pre-COVID trendline, that would be a drop of 10% or a bit more from current levels, which seems plausible.

The Fed is likely to slow and then halt its pace of interest rates hikes in 2023, which should allow home prices to stabilize at some lower level. At that point, it would take declining mortgage rates to boost affordability. Some forecasters think rates will be slightly below current levels by the end of the year. 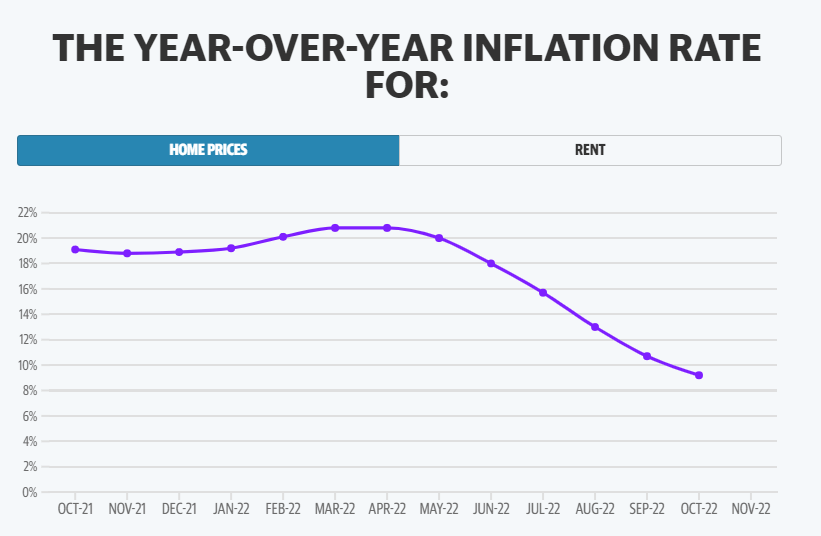 Rent. Like real-estate prices, rents are likely to drop as rising interest rates cool demand for property. The Zillow observed-rent index has already dropped for two consecutive months, from September through November. This also seems likely to continue. Rents are still about 25% higher than pre-COVID levels, yet they’ve only fallen by about half-a-percentage point from the 2022 peak. A return to pre-COVID trends implies a further decline of 10% or so. Many renters won’t benefit until they sign a new lease, since rents are normally set for the length of the contract. But the worst of the pain may be over for people who haven’t been able to buy during the last few years and then got stuck paying rent that’s risen by double-digits.

Cars. The inflation rate for new vehicles peaked at 13% in April 2022. For used cars, it peaked at an insane 41% last February. A semiconductor shortage drove soaring car prices, with manufacturers unable to finish building millions of new cars and frustrated buyers switching to used. The average price of a new vehicle soared to nearly $49,000 during the pandemic. Savvy buyers know how to haggle at the dealership, yet buyers have paid more than the sticker price every single month since January 2021. 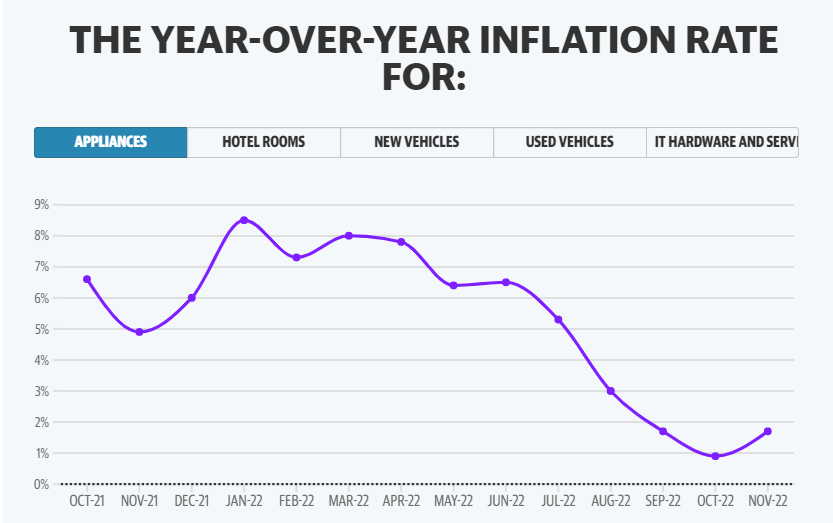 This won’t last. The semi shortage is now easing. There’s still pent-up demand for new cars, which means sales could stay strong during the first half of 2023, with prices moderating but not declining. By the second half of the year, however, there could be a glut of new cars, with prices falling back to more normal levels. Used-car prices will fall faster, and by more. Government inflation data show that used-vehicle prices are already 3% lower than a year ago, with bigger declines expected in coming months. Rising rates are denting used-car sales in particular, and repossessions could rise if there’s a recession in 2023, as many economists expect. By the end of the year, used cars could be a fantastic bargain. Rental-car prices could drop this year as well, for similar reasons.

Appliances. These require semiconductors, too, and at the beginning of 2022, shortages pushed the inflation rate for appliances to nearly 9% on a year-over-year basis. Appliance prices moderated toward the end of 2022 and could start to turn negative in 2023.

Electronics. The price of computers, smartphones, and other gizmos normally declines over time, since ongoing gains in computing power consistently produce more bang for the buck. The chip shortage, combined with the work-from-home boom and a surge in demand for gear, pushed the cost of electronics slightly higher at the beginning of 2022. But that trend has now reversed, and drooping demand in 2023 could mean great deals on many tech products.

Hotel rooms. The cost of a hotel stay soared as the economy reopened in 2021 and 2022, and the lodging industry struggled to keep up with demand and rehire enough people. Those problems are now largely solved, with prices falling back in line. If there’s a 2023 recession, watch for price cuts. Don’t expect the same for airfares, however. Pilot shortages prevent airlines from putting more planes in the sky and jet fuel costs could stay high indefinitely.

Two wild cards. Food and energy costs may continue to strain family budgets and keep overall inflation above the Federal Reserve’s target of 2% or so. Food inflation got worse, not better, during the last six months of 2022, and that could continue. Diesel fuel is unusually scarce, raising the cost of operating farm machinery and transporting food. High fertilizer costs are also pushing food prices up, and that’s due in part to a disruption in fertilizer components from Ukraine, Russia, and Belarus, due to the Russian war in Ukraine.

Consumers have gotten a break recently on some forms of energy, with gasoline prices down 35% from the peak in June and essentially unchanged from a year ago. But natural gas prices have been up for most of the year, pushing heating and electricity costs higher, since utilities that use gas normally lock in prices ahead of time. Global energy markets remain tight, which means a small increase in demand from anywhere could push prices up everywhere. That boost in demand could very well come from China, as it reopens following months of strict COVID lockdowns. Tightening sanctions on Russia could also affect energy supplies, especially if Russian President Vladimir Putin decides to cut exports of oil and gas. But there’s always volatility somewhere, and price hikes in some things in 2023 will be offset by price cuts elsewhere.