The S&P 500 index’s level has slumped roughly 6.1% across 2022’s trading, and the even more tech-heavy Nasdaq Composite index is down roughly 11.3% across the stretch. Meanwhile, the Dow Jones Industrial Average is down a much milder 3.4%.The Dow is made up of 30 publicly traded blue chip stocks, and the index tends to hold up relatively well in the face of volatility.

This retail giant is built to last

Keith Noonan (Walmart): As the U.S.’s largest retailer and the world’s largest company by revenue, it’s not surprising that Walmart is sometimes looked to as an economic bellwether. On the other hand, the company’s shares have actually tended to outperform when the economy is struggling.

Walmart stock held up pretty well in the 2008 market crash, and it was one of few S&P 500 components to post significant returns across the two-year period ending in 2010. 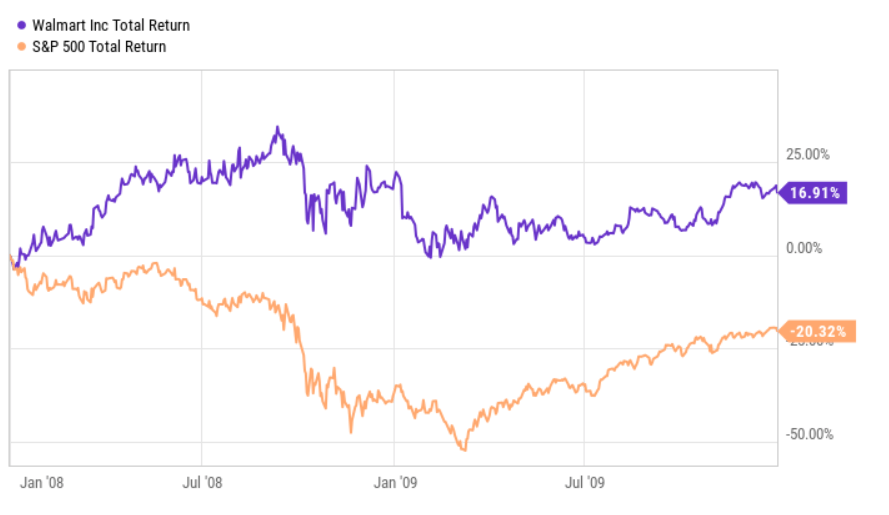 Walmart’s market-beating performance continued from there. By the time economic recovery was in a stronger state at the beginning of 2013, the stock had delivered a 60.7% dividend-adjusted total return over the last five years while the S&P 500 had posted a total return of roughly 8.6%. Meanwhile, the Dow had seen its total return level climb roughly 31.2%.

Walmart has historically been sturdy amid market volatility. That doesn’t guarantee the stock will always outperform in turbulent times, but the bargain-focused retailer continues to be well positioned as a safe haven for income-seeking investors. When economic times are tough and purse strings tighten, Walmart has benefited from strong demand, and it’s likely that this dynamic will repeat.

The company’s 1.6% dividend yield may not knock your socks off, but it should be viewed in the context of a great underlying business and fantastic payout growth history. Last February marked the announcement of Walmart’s 48th consecutive annual dividend increase, and it’s likely that the company will announce the 49th payout increase along with its fourth-quarter report on Feb. 17. That means Walmart is likely just a year away from joining the ranks of the Dividend King stocks.

With the company making big strides in e-commerce and other growth initiatives, and its core business looking very sturdy, Walmart is a safe dividend stock that could significantly outperform the market over the next decade and beyond.

Don’t judge a business solely on its sector

Daniel Foelber (Chevron): The oil and gas industry is cyclical. Earnings tend to ebb and flow with commodity prices, which impose large swings in annual performances for even the integrated majors. Yet for over 30 years, Chevron has consistently paid and raised its annual dividend, making it one of the few energy stocks on the coveted list of Dividend Aristocrats (members of the S&P 500 that have raised their dividend for at least 25 consecutive years). Chevron raised its dividend in 2020 — a year where many of its competitors were reducing their dividends. Chevron also raised its dividend in 2021 from $1.34 per share per quarter to $1.40 per share per quarter. A couple of weeks ago, it increased the quarterly dividend yet again to $1.42 per share.

Chevron’s durability as a reliable dividend stock extends beyond its track record for making payments. Too much debt has long been the downfall of oil and gas businesses. Chevron prides itself on having an industry-leading balance sheet. It has long had a lower financial debt-to-equity and debt-to-capital ratio than its peers. In 2021, Chevron paid off $12.9 billion in debt, finishing the year with a net debt position of $25.7 billion — which is reasonable.

Chevron spent the first half of the 2010s expanding its production and investing in long-term projects. Those investments paid off. Today, Chevron is an incredibly lean business whose operations can achieve breakeven positive free cash flow (FCF) at around just $40 per barrel of oil equivalent. In 2021, Chevron spent just $8.1 billion in capital expenditures and earned a record-high $21.1 billion in free cash flow that it can use to grow the dividend, buy back stock, and reinvest in the business. The chart below illustrates Chevron’s unique ability to grow FCF despite lower capital expenditures. 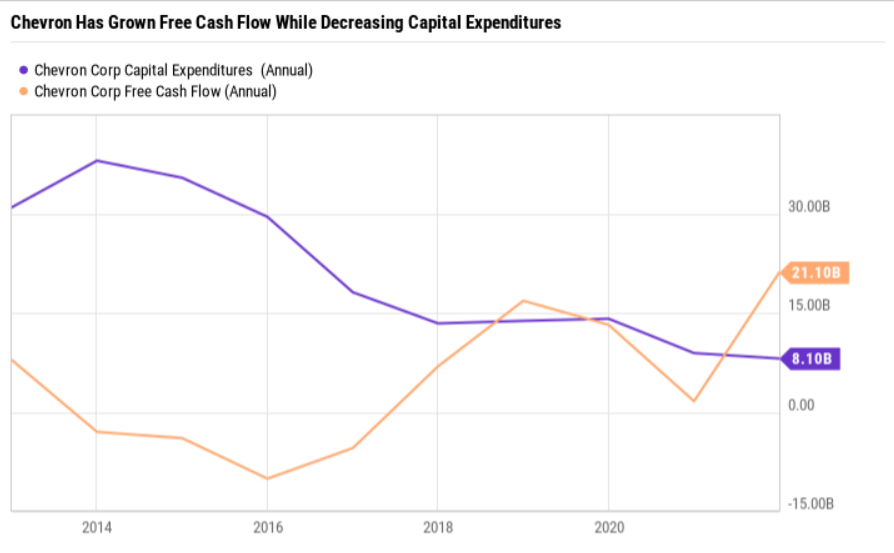 In sum, Chevron’s business is thriving in the current high oil and gas price environment, but the strength of its balance sheet and underlying business help it perform well even when the oil and gas industry is in a downturn. With a dividend yield of 4.2%, Chevron is a high-yield dividend stock worth considering now.

Nobody’s going to give up this recurring revenue service

James Brumley (Verizon): If you’re looking for safety and income, look for companies behind the products and services nobody’s willing to do without. In that nobody I know is ever likely to give up their mobile phones, I’m picking Dow component Verizon Communications as shelter from what could be a turbulent time for the market. It’s tied with International Business Machines for the biggest yield among these 30 blue chips, boasting a dividend yield of 4.8%.

You should know the only real value Verizon offers to investors here is its dividend, and perhaps stability; there’s no growth to speak of in store. In light of the current market environment though, investors may well put a premium on reliability and income. More to the point, investors may seek out the safety that only a name like Verizon can offer them.

That being said, don’t be surprised if Verizon shares perform like a growth stock this year. Whereas most other names ended 2021 with a nice gain, most telecom names — including Verizon — lost ground. Any brewing flight to safety could have an exaggerated effect on Verizon shares, which are still trading at less than 10 times this year’s projected earnings despite the moderately sized rebound from December’s low.