Have the markets turned the corner? Maybe not – but maybe so, at least for the short term. Despite rising inflation in the States, and Russia’s continuing war against Ukraine, high prices for oil, and disruptions in the global commodity markets, Wall Street just finished its best week since November of 2020. Between March 14 and March 18, the S&P 500 rose ~6%, while the NASDAQ was up ~9%. Investors were clearly in a buying mood, and the indexes reflected it.

However, some Wall Street pros are understandably concerned that the market is still vulnerable. In this environment, investors are going to gravitate toward stocks that have proven records of strong share price appreciation. While we all know that past performance won’t guarantee future results, the best place to start looking for tomorrow’s high-growth stocks is among yesterday’s winners.

High energy prices, and particularly rising prices for natural gas on the global market, has been good for Golar. The company has seen its share price rise 70% so far this year.

A quick look at the company’s earnings will show the extent of the growth, and the potential. In 4Q21, Golar showed $93.5 million in EBITDA, up from $78 million in the year-ago quarter. Sequentially, the gain was higher; Q3’s result had been $74.5 million.

BTIG analyst Gregory Lewis sees Golar in a strong position to gain additional business, writing: “We believe we are on the cusp of a multi-year run in LNG project FIDs (Final Investment Decision) as we expect natural gas to serve as a bridge fuel as the world shifts to renewable energy over the next few decades. And more importantly… Golar has a much improved capital structure (~$500M in current liquidity to go after its next flexible Floating LNG (FLNG) project which includes ~$250M in cash), an existing base of LNG assets which could be FLNG conversion projects, and FLNG solutions, which we think positions the company to win multiple FLNG projects over the next two years.”

These comments support Lewis’s Buy rating, while his $30 price target on GLNG stock implies ~43% upside for the coming year.

Overall, Golar’s Strong Buy analyst consensus rating is based on 8 recent stock reviews, that include 6 to Buy and 2 to Hold. The shares are priced at $21.02, and their $22.81 average price target indicates an 8.5% upside from that level. 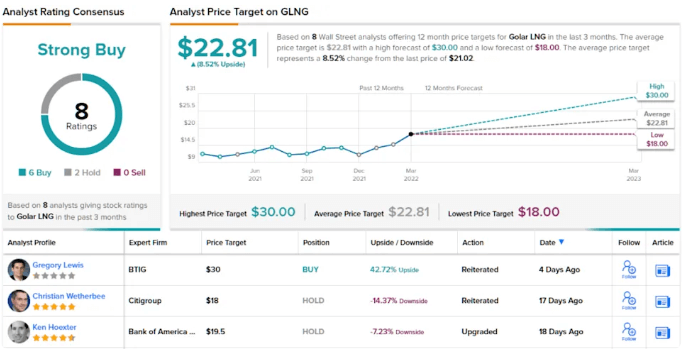 Sticking with the energy sector, we’ll turn our view to Matador Resources. This company engages in hydrocarbon exploration, development, and extraction, focusing on unconventional plays in the North American oil and natural gas industries. Matador has is primary operations in the Wolfcamp and Bone Spring plays the Texas-New Mexico Delaware Basin, with additional assets in Northwest Louisiana.

Matador’s operations are generating cash as well as hydrocarbons. The company reported $334.5 million in cash from operations for 4Q21, up 15% from Q3, and an even stronger 112% year-over-year. This total included $119.3 million in adjusted free cash flow, nearly double the year-ago quarter’s $60.7 million.

The steady growth in cash flow prompted Matador to increase its quarterly dividend this past fall, and to maintain the higher payment this month. The last dividend, paid out on March 14, was for 5 cents per common share. This annualizes to 20 cents, and gives a modest yield 0f 0.3%. The key point here is not the yield, but the combination of management’s statement of intent to increase the returns to shareholders along with the company’s strong cash flow generation. It’s important to note here that MTDR shares have gained 118% in the past 12 months.

Neil Dingmann, 5-star analyst from Truist, writes of Matador: “We believe Matador has done a notable job of creating value in its ten year existence… By our estimates, the company continues to be set up for solid upcoming production/cash flow/stock price growth despite the strong share performance already seen in the past several months. We have high confidence of continued strong well performance in the ~70 wells to be turned to sales this year given the continued operational efficiencies/outperformance previously demonstrated.”

Dingmann’s bullish stance comes with a Buy rating on the stock, while his $68 price target suggests Matador has room for ~29% upside growth by the end of this year.

There are seven recent reviews of Matador shares on record and they all agree that this is one to buy, making the Strong Buy consensus unanimous. The stock is selling for $52.81 and its $62 average price target implies ~17% one-year upside. 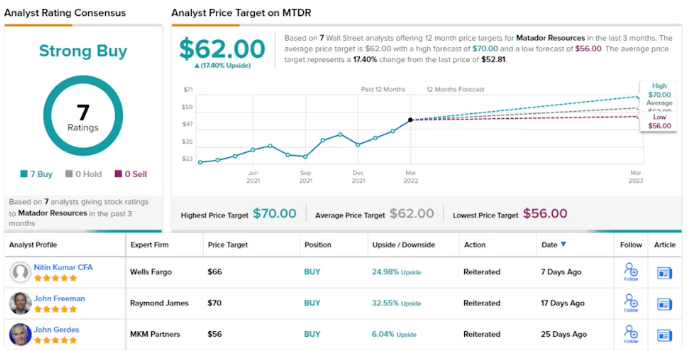