Since the end of the Great Recession 13 years ago, growth stocks have proved virtually unstoppable. This shouldn’t be a surprise given that historically low lending rates have afforded fast-paced companies access to cheap capital that they’ve used to hire and retain talent, acquire other businesses, and innovate.

Although growth stocks have also taken it on the chin during the recent pullback in the broader market, history has shown that fast-growing companies often outperform during periods of economic weakness or contractions. In other words, it could be the perfect time to go shopping for high-quality growth stocks.

If your investing time frame is measured in years, the following three monster growth stocks all have the potential to turn a $200,000 initial investment into a cool $1 million by 2030.

The first monster growth stock that has all the tools necessary to deliver a 400% gain by the turn of the decade is social media platform Pinterest (PINS -1.49%).

To say that shares of Pinterest have been clobbered would probably be an understatement. Since hitting an all-time high of nearly $90 in mid-February 2021, Pinterest’s stock has lost just shy of three-quarters of its value. Skeptics appear worried about the company’s nine-month decline in monthly active users (MAU) as well as the ramifications of what Apple’s iOS privacy changes might have on ad-driven businesses. I’m here to tell you that neither of these concerns has legs. 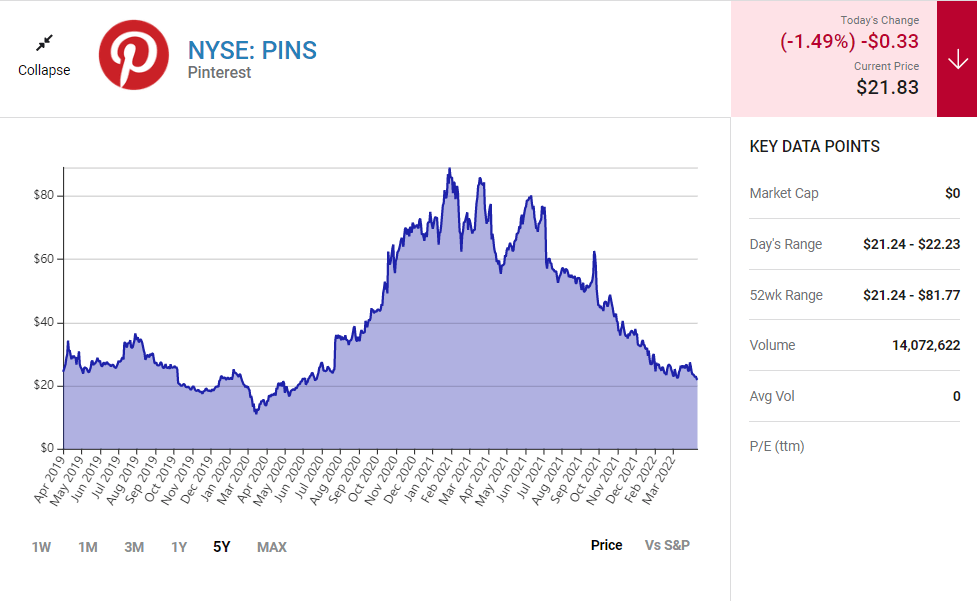 Although it’s absolutely true that Pinterest is working on a three-quarter streak of declining MAUs, keep in mind that its user growth accelerated well above normal during the initial stages of the pandemic. The decline over the past three quarters corresponds with vaccination rates ticking up and people returning to some semblance of normal. But if you were to pan out and examine Pinterest’s MAU growth over a five-year period, you’d still see a steady uptrend.

Arguably far more important is the fact that Pinterest is monetizing its 431 million MAUs with ease. Last year, global average revenue per user (ARPU) rose 36%, with international ARPU rocketing higher by 80%. There’s a lot of room for ARPU expansion overseas, which is what should help Pinterest maintain a double-digit growth rate. It also demonstrates that advertisers are willing to pay quite the premium to reach Pinterest’s large base of users.

Meanwhile, Apple’s iOS privacy change, which allows users to opt out of data tracking, is a non-event for Pinterest. While Apple’s changes could adversely affect platforms that rely on features such as “likes” to determine users’ interests, Pinterest’s entire premise is users sharing the things, places, and services they like. Pinterest’s 431 million MAUs are putting their interests on a silver platter for merchants. All Pinterest has to do is keep users engaged and be an effective middleman.

Given Pinterest’s steady history of growth, it looks like a screaming bargain at its current level. 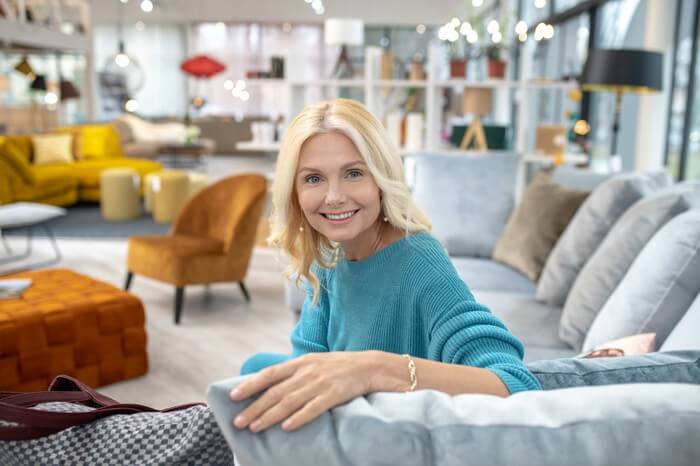 When you think of monster growth industries, things like cloud computing, the metaverse, and artificial intelligence probably come to mind. But what would you say if I told you one of the most consistently fast-growing companies that could quintuple your initial investment over the next eight years is a furniture stock? Let’s take a closer look at small-cap stock Lovesac ( LOVE 1.97% ).

Generally, the furniture industry is stodgy and unexciting. It’s comprised of brick-and-mortar retailers relying on foot traffic into their stores and purchasing similar products from a small number of wholesalers. Lovesac is attempting to disrupt this industry with both its unique products and its multiple sales channels. 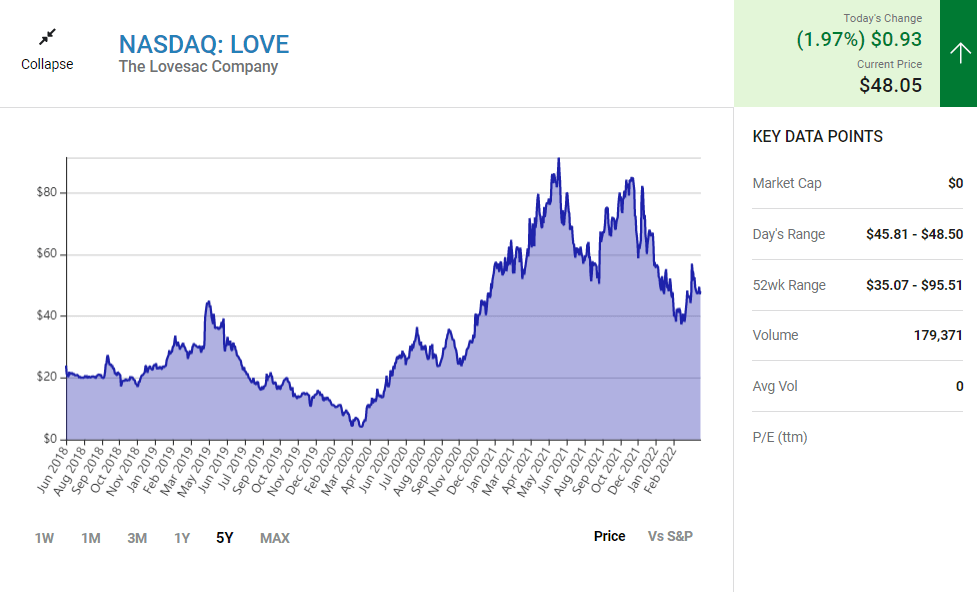 Years ago, Lovesac was known for its beanbag-styled chairs (“sacs”). But nearly 88% of the company’s fiscal 2022 revenue (the company’s fiscal year ended Jan. 30, 2022) derived from the sale of “sactionals.” A sactional is a modular couch that buyers can rearrange dozens of ways to fit virtually any living space.

Aside from function, there are three big advantages with sactionals. First, they’re upgradable with everything from charging ports to surround-sound speakers. Second, there are over 200 different cover choices, meaning a sactional can match any color or theme of a home. And third, the yarn used in these covers is made entirely from recycled plastic water bottles. That’s eco-friendly furniture, incredible choice, and function all rolled up into one product.

The other big difference between Lovesac and the rest of the furniture industry is its omnichannel sales platform. For example, Lovesac shifted nearly half of its sales online during the pandemic. It also operates pop-up showrooms, has a handful of brand-name showroom partnerships, and operates 146 retail locations in 39 states. With a bigger reliance on direct-to-consumer sales than traditional furniture retailers, Lovesac’s overhead expenses are considerably lower. 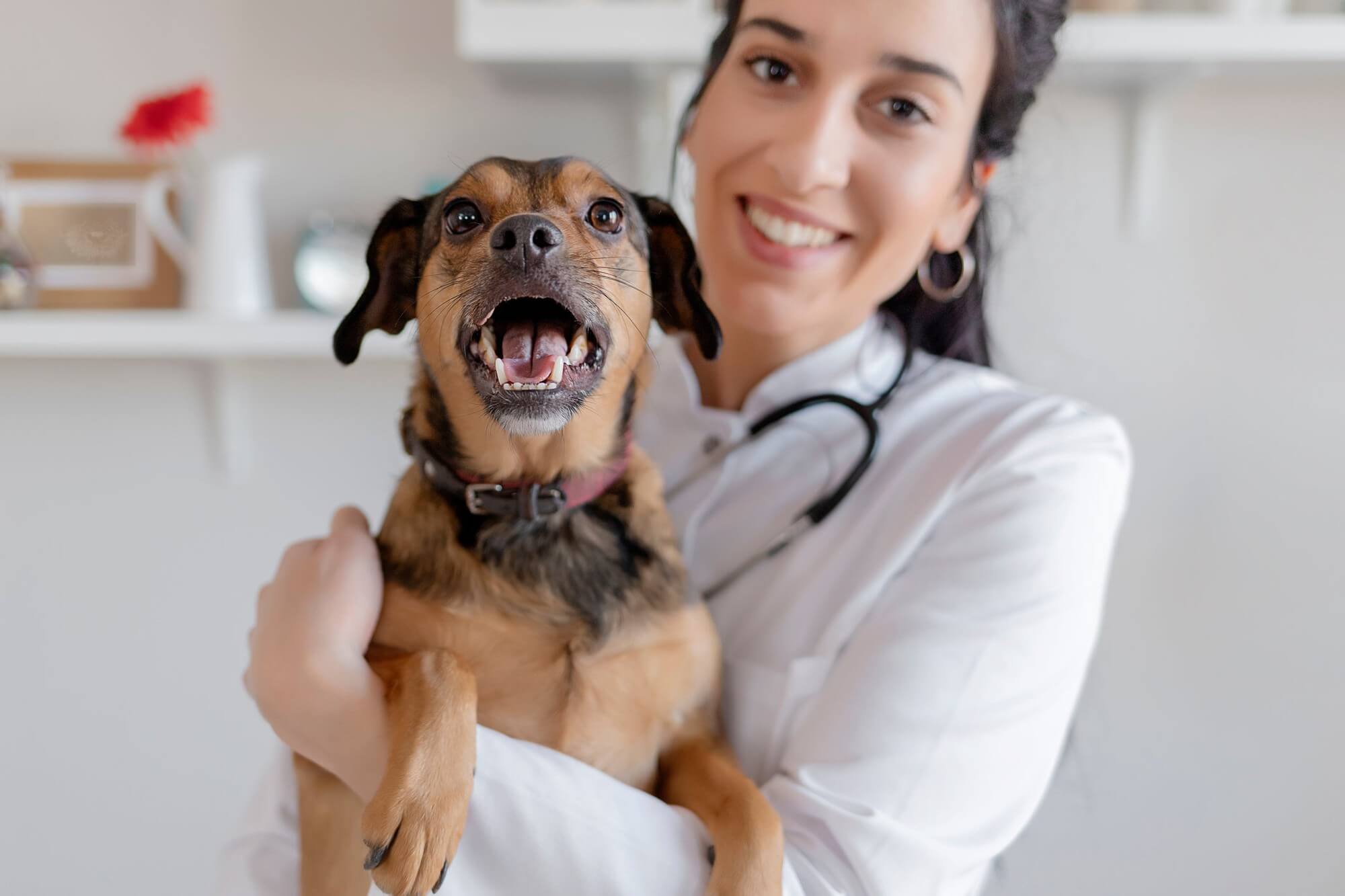 A third and final monster growth stock with the capacity to turn a $200,000 initial investment into $1 million by 2030 is companion animal health insurance company Trupanion ( TRUP -3.33% ).

While spending growth on companion animals isn’t going to knock investors’ socks off, it’s arguably one of the most recession-resistant industries on the planet. Last year, an estimated $109.6 billion was spent on pets in the U.S., with more than $32 billion of that spending going toward veterinary care and product sales. It’s been more than a quarter of a century since year-over-year spending on companion animals has declined in the United States. In short, pet owners are willingly opening their wallets for their furry, gilled, scaled, and feathered family members. 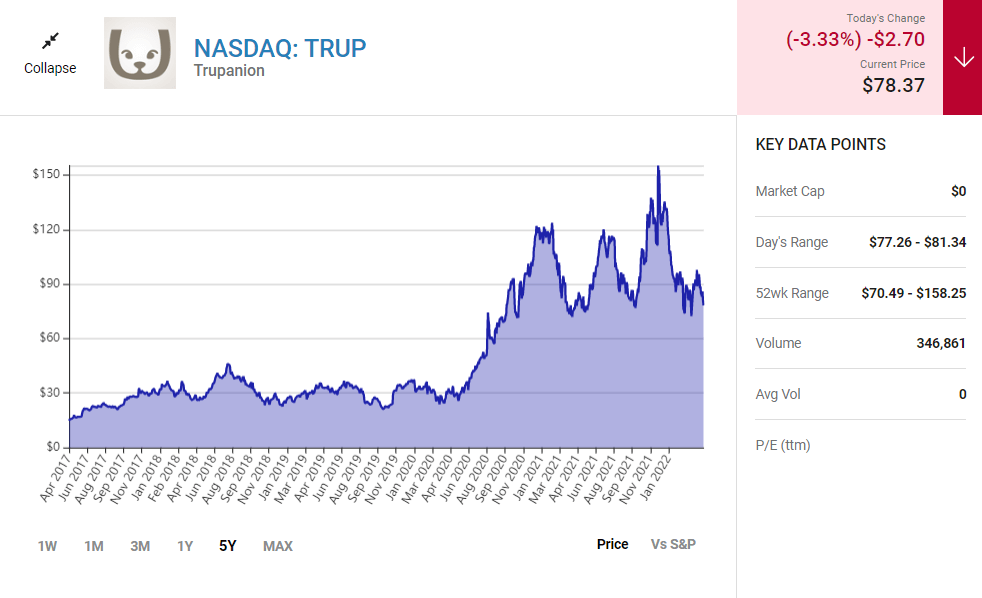 What makes Trupanion such an intriguing investment opportunity is its addressable market. Only an estimated 2% of companion animals in the U.S. and Canada are covered by a health insurance plan. Comparatively, the U.K. and Sweden have pet-coverage penetration rates of 25% and 40%, respectively. If Trupanion, which is already the leading pet insurance company, were to reach a 25% penetration rate in the U.S. and Canada, its addressable market would be more than $38 billion! For context, the company delivered $699 million in full-year sales in 2021.

Even though competition is picking up in the pet insurance space, Trupanion has a few competitive advantages on its side. For instance, it has more than two decades of rapport built up with veterinarians and clinics working in its favor.

Furthermore, Trupanion is the only major health insurer that offers software to handle payments to veterinarians at the time of checkout. That means less hassle for its members and all the more reason for veterinarians and clinics to promote Trupanion insurance plans.

This is a company that has the tools to sustain a 20% top-line growth rate through at least the midpoint of the decade. It’s the perfect fast-paced stock to fetch big gains for patient investors by the turn of the decade.