3 High-Octane Growth Stocks With 357% to 571% Upside, According to Wall Street

Regardless of whether you’re a new or tenured investor, this year has been a historic challenge with few safe havens. Since the three major U.S. indexes achieved their all-time highs between the midpoint of November 2021 and the first week of January, each has fallen into a bear market, with peak declines ranging from 22% to 38%. Even the bond market is having its worst year on record.

Yet the interesting thing about Wall Street analysts, pundits, and investment managers is they rightly see the positive. That’s because every double-digit percentage decline throughout history has eventually been recouped by a bull market.

Of course, optimism can vary quite significantly on Wall Street. What follows are three high-octane growth stocks that select analysts and pundits believe offer upside ranging from 357% to as much as 571%!

The first supercharged growth stock with jaw-dropping upside potential, according to one pundit, is North America’s leading electric-vehicle (EV) manufacturer, Tesla (TSLA 0.12%). According to the CEO and chief investment officer of Ark Invest, Cathie Wood, Tesla can reach a split-adjusted share price of $1,533.33 by 2026 — Wood’s original target of $4,600 was issued prior to Tesla’s August 3-for-1 stock split — which would imply 571% upside. 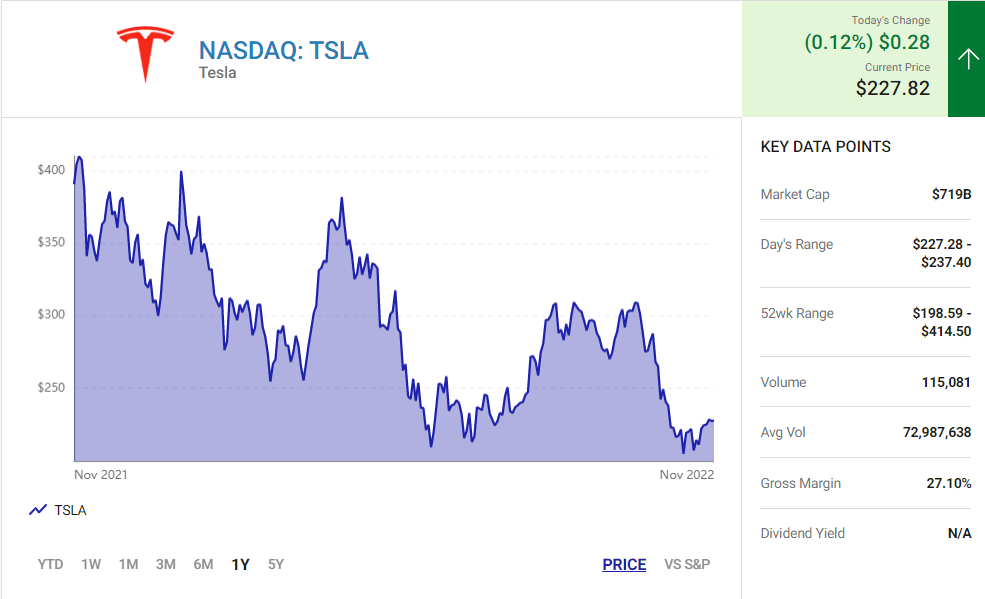 Wood’s utopian price target assumes there’ll be an incredible ramp-up in production from Tesla’s Gigafactories, as well as the rollout of a significant number of robotaxis. Ark’s research report forecasts that robotaxis will account for 34% of a projected $843 billion in full-year sales for Tesla by 2026. The company is expected to bring in $83.5 billion in sales this year, to give you some idea of how quickly Cathie Wood anticipates sales will ramp.

One thing definitely working in Wood’s favor is the fact that Tesla has turned the corner to recurring profitability. With the company no longer reliant on renewable energy credits to reach the profit column, at least some level of premium valuation is expected.

However, Wood’s price target appears virtually certain to come up short due to Tesla’s greatest risk: its CEO, Elon Musk. Aside from the fact that Musk’s acquisition of Twitter is a monumental distraction, practically all of his innovation-based prognostications have failed to materialize. For example, not a single robotaxi has hit the road following his pledge to have 1 million robotaxis on the road by 2020. Further, level 5 full self-driving has been promised as being “one year away” for the past eight years and counting.

The other issue for Tesla is that its ancillary operations are a drag. Though optimists will point out that it’s more than just a car company, Tesla’s solar operations have never been profitable (or even close to it). Suffice it to say, Tesla doesn’t belong anywhere near $1,533 per share until Elon Musk can deliver on what is currently a mountain of empty promises. 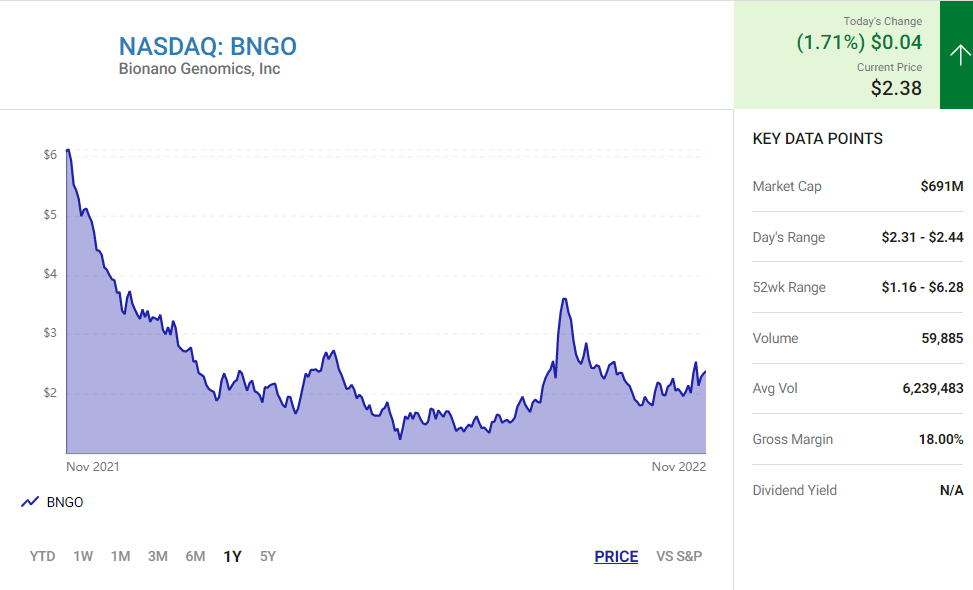 A second high-octane growth stock with incredible upside over the next year, at least according to one Wall Street analyst, is genome mapping solutions company Bionano Genomics (BNGO 1.71%). Oppenheimer analyst Kevin DeGeeter believes small-cap Bionano can reach $12 per share, which would equate to a 426% increase from where shares ended last week.

DeGeeter’s optimism has to do with the rapid adoption of Saphyr, Bionano Genomics’ optical genome mapping (OGM) system. Saphyr is designed to help researchers and drug developers identify structural abnormalities that could potentially help them develop treatments to what are currently difficult-to-treat diseases.

Supporting DeGeeter’s optimism has been a slew of publications and studies demonstrating the sensitivity of Saphyr in identifying a variety of structural variations. In August alone, Bionano press releases covered Saphyr’s successes in patients with myelodysplastic syndrome, adult-onset ataxia, and select chronic lymphocytic leukemia patients.

Additionally, Bionano’s sales needle continues to point higher. When the June quarter came to a close (Bionano will report its third-quarter results tomorrow, Nov. 3), the company had installed 196 of its Saphyr systems (a 62% year-over-year increase) and enjoyed 76% revenue growth to $6.7 million from the prior-year period.

Bionano Genomics is also sitting on a sizable pile of cash. As of June 30, 2022, it had $187.3 million in cash, cash equivalents, and marketable securities. Even with ongoing operating losses, this cash pile should be sufficient to fuel ongoing research and innovation for a long time to come.

However, it’s important to recognize that Saphyr isn’t approved by the Food and Drug Administration (FDA). Without that approval, which could take some time to get, Saphyr’s commercial use could be limited domestically. There’s little question Bionano Genomics and its OGM system are exciting. Reaching $12 in a year, though, is very unlikely.

The third high-octane growth stock with impressive upside potential over the coming 12 months, based on the opinion of one Wall Street analyst, is clinical-stage biotech stock Ocugen (OCGN -1.16%). Analyst Robert LeBoyer of Noble Financial reiterated a price target of $8 for Ocugen five weeks ago. If this lofty target were to be hit, Ocugen shareholders would rejoice in a 357% gain.

LeBoyer’s excitement primarily relates to COVID-19 vaccine candidate Covaxin. Covaxin was developed by India’s Bharat Biotech; however, Ocugen has the commercialization rights to the drug in the U.S., Canada, and Mexico. What differentiates Covaxin from other approved and emergency-use-authorized vaccines is that it utilizes the inactive SARS-CoV-2 virus particles.

Initial phase 3 testing in India last year produced a vaccine efficacy (VE) of close to 78% in a large-scale study. Considering that COVID-19 has become endemic and most people have yet to receive their initial inoculations or booster shots globally, there remains a reasonably large recurring revenue opportunity for COVID-19 vaccine developers. 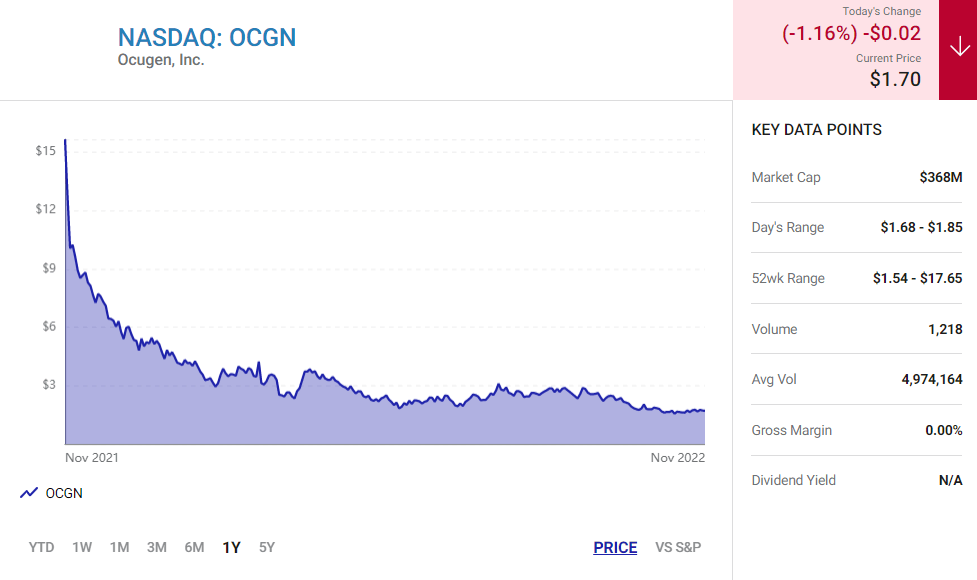 At the moment, Ocugen is running a large-scale phase 2/3 study, with the hope of commercializing Covaxin throughout North America. Unfortunately, the company is facing a couple of huge obstacles that make achieving LeBoyer’s $8 price target especially unlikely.

First of all, Covaxin has previously been placed on clinical hold in the U.S., which stunted its clinical progression and placed it well behind a number of other COVID-19 vaccines that have already gained FDA approved or EUA. To add, its 78% VE lags three FDA-approved or EUA vaccines in the U.S. that all surpassed a VE of 90%.

Second, Ocugen maintains the commercialization rights only in North America. Even if Covaxin were wildly successful in international markets, Ocugen wouldn’t see a dime in revenue if the U.S., Mexico, and Canada fail to approve and purchase the product.

Lastly, Ocugen’s cash position is precarious, at best. Despite ending June with $115 million in cash, cash equivalents, and restricted cash, the company estimated this capital would only fund its operations into the second quarter of 2023. This makes dilutive share offerings very likely.