Is the bear market over? This is the question that everyone wants to know.

After a near-historic decline over the first half of the year, the stock market has been on a roll over the past month, with the S&P 500 rising nearly 9%, while the Nasdaq is up 14%.

JPMorgan’s chief global markets strategist Marko Kolanovic has an upbeat message for those concerned about the sustainability of the rally.

“Risk markets are rallying despite some disappointing data releases, indicating bad news was already anticipated/priced in… Although the activity outlook remains challenging, we believe that the risk-reward for equities is looking more attractive as we move through 2H,” Kolanovic opined.

Against this backdrop, the analysts at the banking giant have pinpointed two names which they believe are ready to surge ahead – by the order of 40% or more. In fact, the JPM experts are not the only ones singing these stocks’ praises. According to the TipRanks platform – they are rated as Strong Buys by the Street’s analysts. Let’s take a closer look.

We’ll begin with Olin, a company whose roots stretch back all the way to 1892 when it was a small supplier of blasting powder. Since then, it has grown significantly to become a global manufacturer and distributor of chemical products. In fact, it is now the world’s biggest producer of chlorine and caustic soda and their derivatives, and with a ~6% market share, takes the number 1 spot in the global chlorine/caustic soda market.

Toward the end of last month, Olin released its latest quarterly report – for 2Q22. Revenue increased by 18% year-over-year to $2.62 billion, while the company delivered diluted EPS of $2.76, beating the Street’s call for $2.57. But beyond the headline numbers, of particular interest to shareholders, is the company’s buyback activity.

Having rehabilitated its balance sheet in 2021, the company is now using its cash flow for the advantage of its shareholders, and aggressively shrinking the share base. The company repurchased 7.4 million shares in Q2, allocating $426.5 million to the endeavor, and combined with Q1’s purchases, spent $689.7 million on buybacks during the year’s first half.

With a new $2 billion share repurchase program just announced that complements the $362.5 million left over from a prior program, these buys inform J.P. Morgan’s Jeffrey Zekauskas’ bullish take.

“We estimate that Olin will spend $1.4b this year on share repurchases,” the analyst writes. “Olin is conducting its share repurchase effort with free cash flow and is not utilizing financial leverage. We also see no reason why this pattern of repurchase might not continue at the same rate in 2023 or in future years, if Olin’s share price does not move meaningfully higher. That said, we believe that Olin is comfortable with repurchasing its shares at least into the mid-$60s based on its public comments.”

To this end, Zekauskas rates Olin shares an Overweight, while his $85 price target makes room for share appreciation of ~67%.

Overall, Olin shares have a Strong Buy rating from the analyst consensus, showing that Wall Street agrees with Zekauskas’ assessment. The rating is based on 9 Buys and 2 Holds set in the past 3 months. Shares are selling for $51.01, and the average price target, at $71.91, implies ~41% upside potential. 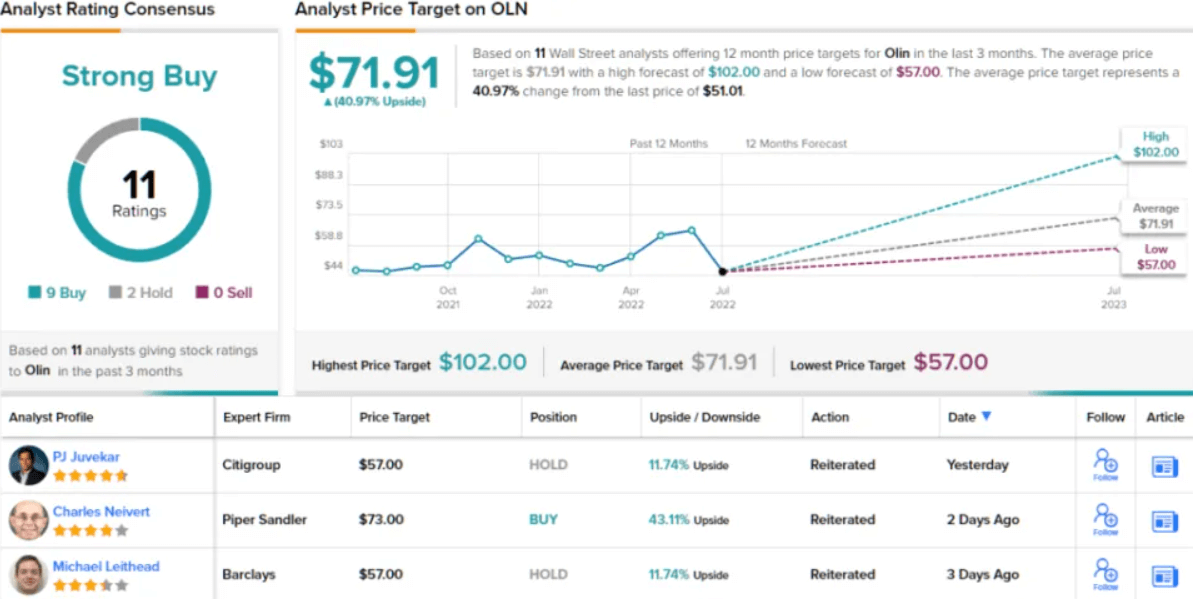 From chemical products it’s just a short hop to waste management services. GFL – which stands for green for life – provides waste solutions and soil remediation services. The company caters to residential, municipal, commercial, industrial and institutional clients spread across Canada and has customers in more than half of the U.S. states. With over 19,000 employees, GFL is North America’s fourth biggest diversified environmental services company.

The company has been very busy on the acquisition front, making 28 tuck-in acquisitions since the start of the year, not that it seems to have a significant negative impact on the bottom-line.

In the recent Q2 report, adj. EBITDA came in at C$453 million, easing ahead of the $C$427 million expected by Wall Street. The top-line performance complements the earnings profile; revenues were C$1.708 billion, also coming in above the consensus estimate of C$1.559 billion.

Although J.P. Morgan’s Stephanie Yee notes the impact costs are having on margins, she sees enough other positive to keep the bull thesis intact.

“Management continues to see opportunities for more tuck-in deals to densify the company’s footprint,” Yee writes. “While the cost headwinds have pushed out the company’s timeline towards obtaining higher margins, we still see the overall business growing double digits in 2022 and high-single-digits in 2023, generating more dollars that can be put to work. We also see the stock as attractively valued at current levels.”

These comments underpin Yee’s Overweight rating and $42 price target. Should the figure be met, investors will be sitting on returns of 47% a year from now.

And what about the rest of the Street? Everyone is on board. The stock boasts a Strong Buy consensus rating, based on a unanimous 8 Buys. The forecast calls for 12-month gains of 39%, considering the average price target stands at $39.65. 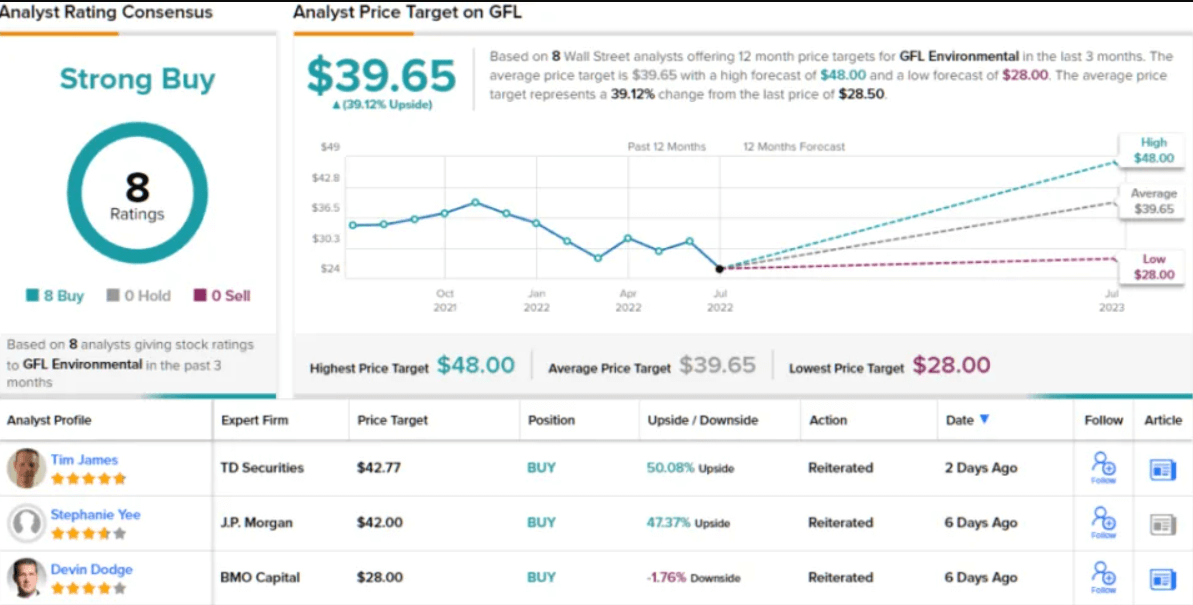