The S&P 500 broke below 4,000 this week, for the first time since the end of July. It has investors wondering: Does this mark the low point of a roller coaster ride? Stocks rose all last year, fell from January to June, rallied from July to mid-August, and now are falling again.

According to Wells Fargo strategist Paul Christopher, it’s evidence that the stock rally is sputtering to a halt. Christopher writes that “Cracks in financial market liquidity are appearing,” and says of the S&P 500, “3,900 is the next key level of support. Below that brings the June intraday low of 3,636 back into the conversation.”

With inflation running at 8.5%, Powell’s position implies further rate hikes, and market watchers expect the Fed to implement two more 75-basis point hikes this year. That will bump the Fed’s key rate to range of 4% to 4.25%, and increase the risk that tighter money will tip the economy into recession.

This will naturally bring investors to start looking into defensive stocks, and particularly high-yielding dividend payers. These are the standard defensive plays when markets turn south – the dividend provides some surety of an income stream, and in today’s environment, some protection against inflation.

Bearing this in mind, we used the TipRanks’ database to zero-in on two stocks that are showing high dividend yields – at least 8%. Each stock also holds a Strong Buy consensus rating; let’s see what makes them so attractive to Wall Street’s analysts.

We’ll start with Saratoga Investment, a business development corporation. These companies invest in, and provide credit and other financial services to mid-market enterprises – small- to mid-sized firms that may not qualify for traditional banking services. Saratoga’s customer base is made up of the type of company that has been the traditional driver of the US economy, the small businesses that generate the most job creation.

Saratoga recently reported its financial results for Q1 of fiscal 2023, the quarter ending on May 31 of this year. As of that date, the firm’s portfolio had a value of $894.5 million, and included investments in 45 companies. Of this total, some 80% is first-lien term loans, and 9.9% was common equity. The remainder was divided between second lien term loans, unsecured loans, and subordinated notes.

This portfolio generated a total investment income of $18.68 million in the fiscal 1Q23, up 11% year-over-year. Per share, net investment income came to 66 cents, a year-over-year gain of 37%. With this level of income, Saratoga was easily able to cover the Q1 dividend of 53 cents per common share – and in fact, raised the dividend payment by 1 cent in the fiscal Q2 declaration, up to 54 cent per common share. The raised dividend will be paid out on September 29.

At the new rate, the dividend annualizes to $2.16 per common share, and gives a yield of 8.8%, just above the current rate of inflation – making the dividend high enough to ensure that SAR gives investors a positive rate of real return.

Compass Point’s 5-star analyst Casey Alexander is impressed with Saratoga’s execution in recent months, writing: “Saratoga Investment Corp has carved out a track record befitting a true growth BDC. SAR’s NAV has reached new all-time highs despite the COVID credit cycle… With its superior growth performance, SAR is earning a premium multiple of a ‘growth’ BDC. We are maintaining our target P/NAV multiple at 1.00x. SAR is working through a period of lower average yields as well as a couple of stressed credits in their portfolio. We still expect SAR to trade at a premium to SAR’s peer-group P/NAV of 0.81x, but a discount to those BDC’s recognized as ‘growth’ BDCs.”

Alexander believes that this stock will continue to perform for investors, and rates it as a Buy, with a price target of $28.50 indicating potential for ~19% share appreciation in the months ahead. Based on the current dividend yield and the expected price appreciation, the stock has ~28% potential total return profile.

There’s some evidence that that Street is in line with the bulls here, for while SAR has only picked up 3 recent analyst reviews, they all agree that that is a stock to Buy, making the Strong Buy consensus rating unanimous. The shares are currently trading for $24 and their $29.67 average target implies a one-year upside potential of ~24%.

The second stock we’ll look at is another BDC, Crescent Capital. This firm directs its activity toward private mid-market enterprise customers, for whom it originates loans and invests in existing debt and equity. In its lifetime, Crescent, which bills itself as an alternative asset manager, has built a portfolio totaling $38 billion, made up of original loans and existing debt and equity of the target investment base.

The bulk of Crescent’s portfolio, just over 60%, is made up of unitranche first lien loans, while another 26% is composed of senior secured first liens. The remainder of the portfolio is composed of various types of debt and equity investments.

Investors should follow these income numbers, as they allow Crescent to cover its dividend payment. The next dividend, set to be paid out on October 17, is for 41 cents per common share. This annualizes to $1.64, and yields an impressive 9.4%. Crescent will also pay out a previously announced special dividend of 5 cents per common share on September 15.

Oppenheimer analyst Mitchel Penn has been covering this stock, and sees the dividend, and the company’s ability to prosper even if rates go up, as key points for investors. He states, “Our model assumes interest rates continue to rise and that the central bank does not reverse course. If that did occur, management fee waivers through end-2023 would likely allow Crescent to earn enough to cover the $1.64 dividend, which implies an 7.8% ROE…. If LIBOR rises 100 bps, management estimates that NII would likely rise $7.4M, or $0.24/share. After an incentive fee, we estimate $0.20. We have incorporated some of this rate increase in our model as appropriate.”

Advancing from those comments, Penn sets an Outperform (i.e. Buy) rating on the shares, along with a price target of $19, suggesting an upside of 9% by the end of next year.

This is another stock with a unanimous Strong Buy consensus rating, based on 3 positive analyst reviews set in recent weeks. The stock’s average price target of $18.83 implies ~8% upside potential from the current trading price of $17.25. 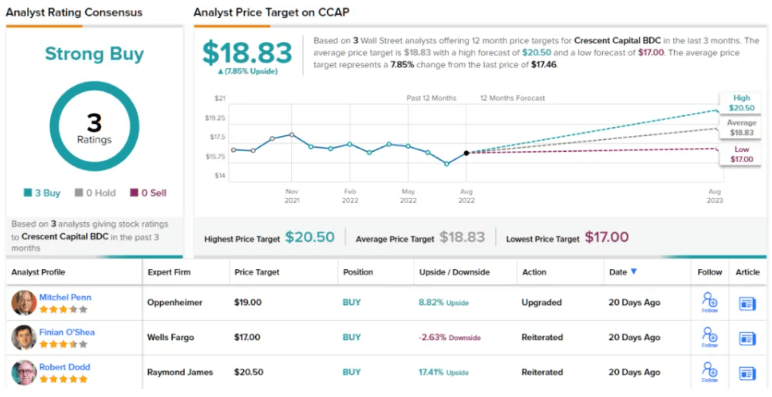