After getting crushed in 2022, could shares bounce back next year?

Tesla (TSLA -6.27%) shares have been hammered this year. The stock is down more than 50% year to date. Investors seem worried about the company’s potential to continue growing sales so rapidly during a tough macroeconomic environment.

While it’s impossible to know which way the stock price will move next year, there are a couple of reasons to believe the stock could attract some positive attention. Two catalysts are on the horizon that could excite investors: soaring sales in the company’s energy business and the long-awaited launch of the Cybertruck. 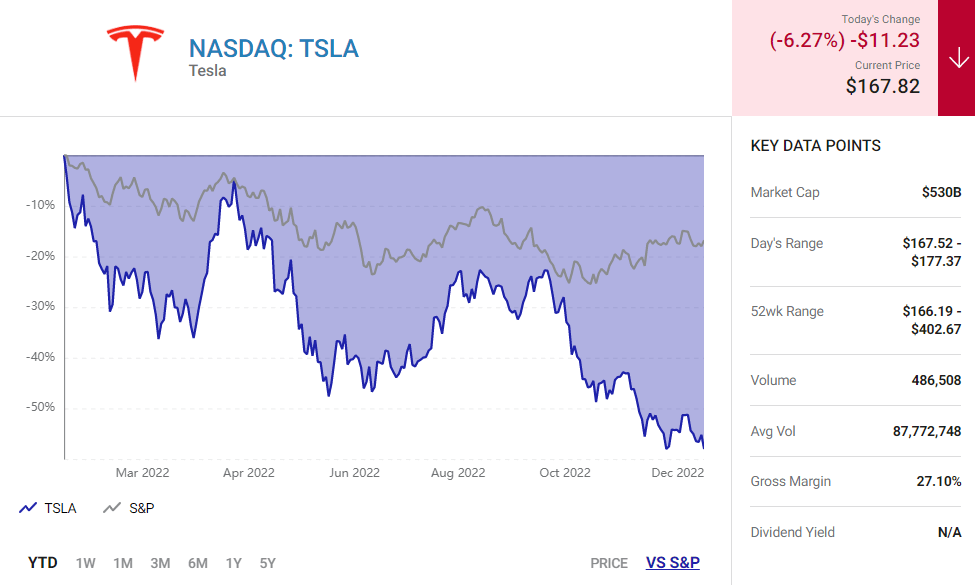 While Tesla’s 42% year-over-year growth in vehicle deliveries in the third quarter was impressive, one smaller part of its business was growing meaningfully faster. The company deployed 1,100 megawatt-hours of energy storage, up 62% year over year. This was “by far the highest level” of energy storage deployments the it has ever achieved, Tesla said in its quarterly letter to shareholders. Yet demand for these products, management said, is still trending ahead of supply.

To better address the fast-growing market for its energy storage business, Tesla said, it was ramping up production at its factory in Lathrop, California.

The momentum in this business seems to have continued into Q4. Indeed, the company announced on Dec. 9 that it deployed 100 megawatt-hours of energy storage capacity in a single project in Belgium.

While the energy storage business is important to Tesla, it’s still small in relation to overall revenue. In Q3, for instance, automotive revenue accounted for about $18.7 billion of the $21.5 billion in total revenue. For this reason, the company’s vehicle plans are likely to be the biggest driver of sales.

This is why investors should be watching Tesla management’s comments on Cybertruck closely. The long-awaited all-electric truck is in its “final lap” of preparation before the company can begin production, said CEO Elon Musk during the third-quarter earnings call. The vehicle is expected to enter production sometime around the middle of 2023, according to management.

It’s always possible that the Cybertruck’s launch will get delayed again. But its move to market does seem to be close enough for investors to start giving more weight to the vehicle’s sales potential in their analysis. Putting the hype for the vehicle into context, Tesla had garnered an estimated 1.5 million reservations for the vehicle by November 2022.

The pickup truck market, of course, is nothing to sneeze at. The global pickup truck market was estimated at $223 billion in 2021, according to Grand View Research. The research firm estimates that North America makes up around three-fourths of this market.

While there are a number of catalysts for Tesla’s business and the stock, these two items could be notable drivers in 2023 and beyond.